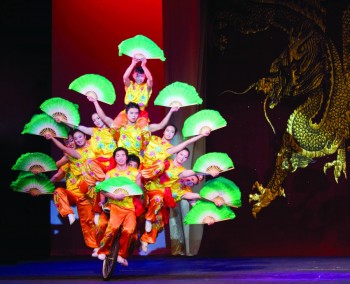 The Peking Acrobats will perform in Sauder Hall this Tuesday, February 10th.

This Tuesday, February 10, the Sauder Concert Hall will welcome a very different group than its usual performing artists: The Peking Acrobats.

The Peking Acrobats are a Chinese acrobatics group that began in 1986 and has travelled the world performing daring stunts and aerial maneuvers. They specialize in trick-cycling, contortion, tumbling and performing stunts upon large stacks of chairs.

“The Performing Arts Series tends to be just music,” said Brian Mast, music center managing director and the arts presenter running point for this show, “but we like the idea of expanding it to be more diverse in the artists that we bring.”

Other shows in this year’s Performing Arts Series include Conspirare, the Turtle Island Quartet, the Indigo Girls and various other musical performances. Aside from the Peking Acrobats, the only other non-musical show will be the return of Garrison Keillor as a “bonus concert” this May.

To prepare for the arrival of the Peking Acrobats, Sauder’s stage floor will be covered in masonite, and the Music Center was also asked to provide 10 red bricks for the performance.

“They might be doing some kind of kung fu act, splitting the bricks,” suggested Mast. “We’re not going to be able to do some acts because we don’t have suspended lines in Sauder, so they’ll have to adapt their show some.”

Despite the adapted show, Mast is excited for people to see some of the most notorious acts. “They’re going to be 20 feet in the air just stacking chairs under them. I’m really excited,” said Mast.

When asked how the idea to invite the Peking Acrobats came to him, Mast said the idea was actually pitched to him in a New York conference for the Association of Performing Arts Presenters (APAP).

“We didn’t just sit down and look for a Chinese acrobat group,” said Mast. At the APAP conference, arts presenters like Mast can find anything from “a guy playing a tin can, to a full Broadway show.” This time, Mast turned down both of those options for the Peking Acrobats.

“One of the reasons [we chose Peking Acrobats] is that they have live musicians playing traditional Chinese instruments on stage with the acrobats,” said Mast as to why they fit more with the Music Center’s vision.

Justin Plank, a senior biology and accounting major, is also excited to attend this event.

“This group caught my eye because it’s different from what’s normally in Sauder,” said Plank. “I looked up a few of their stunts, and I really hope they perform the one where they jump through five rings. It’s amazing they can jump so high with such accuracy!”

The general Goshen population seems to be equally excited. After only one day of ticket sales, which started on August 4, the show was sold out into the choral terrace. As of today, there are only a few seats left in the choral terrace to reserve.

According to Mast, many people will donate their tickets back to the Music Center if they can’t make it because of the weather, so late-comers would have a decent chance of getting a ticket at the door. Tickets for seating in the choral terrace are only $15, and the show starts at 7:30 p.m. Tuesday night.