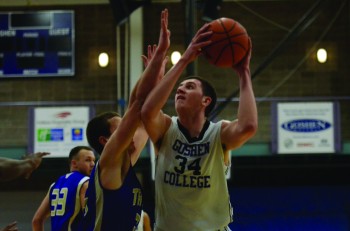 Trevor Commissaris, a junior, goes up for a lay up against a Spring Arbor defender

The Goshen Men’s basketball team saw a month of ups and downs continue when they were defeated Tuesday night on the road by the Pilots of Bethel College, 83-78. The defeat dropped the Leafs’ record to 4-4 on the month and was Goshen’s third loss following a win in January.

Goshen played evenly with Bethel for most of the first half, before the Pilots went on a 13-4 run in the final 5 ½ minutes of play before halftime. Bethel entered the break with a 39-30 lead; a lead they would never relinquish. The Maple Leafs regrouped at halftime and pressured the Pilots for the final 20 minutes, coming within one point of Bethel with just over 7 minutes to play. That was as close as Goshen would come to walking away with the victory, as Bethel managed to have just enough resolve to ultimately thwart the Maple Leafs’ comeback bid and secure the win.

Goshen was led offensively by junior Dominique Bolden, who produced a 20 point, 4 rebound performance. Junior Trevor Commissaris added 16 points and a team high 7 rebounds to go along with the team’s only blocked shot. Junior Brandon Demmings and sophomore Billy Geschke chipped in 13 and 12 points respectively, as well as 3 rebounds apiece. Bethel was led by the trio of Zach Miller-24 points, Clay Yeo-19 points, and Matt Schauss-19 points. Schauss also had game highs in rebounds with 12, and blocks with 8.

The Maple Leafs entered Tuesday’s game looking to avenge December’s 20 point loss at home to the Pilots, but unfortunately were unable to accomplish this despite shooting better than 49% on field goals and only turning the ball over 3 times. Bethel however, shot better at the line (87.5% to 64.3%) and from 3-point range (37% to 26.3) than Goshen. The Pilots also out rebounded and recorded more assists than the Maple Leafs.

The loss puts Goshen’s record at 13-10 overall and 6-5 in conference play. The Maple Leafs will look to improve both of those records on Saturday against Grace College. Saturday’s game will be at Goshen’s Gunden Gymnasium, beginning at 3:00 PM.