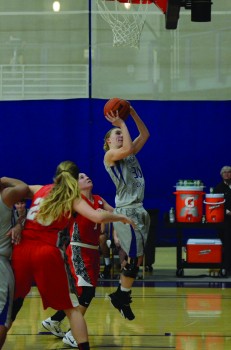 Sophie Sears, a sophomore, takes a shot during Saturday’s game

Goshen (15-7, 6-4 Crossroads League), who entered the contest receiving votes in the NAIA Top 25 Poll, built a 23-15 lead with 6:46 left in the first half. The Cougars’ first-year player, Faith Johnson, however, scored 11 points over the final four minutes as part of a 25-12 run to give Spring Arbor a 40-35 advantage at halftime.

After not having the lead for most of the second half, the Maple Leafs had a late 8-0 run to find itself up by two against the Cougars. Another Cougar Freshman, Autumn Goggin, answered drilling a three at the 1:02 mark and Junior Jessica Mabry would add a free throw to put the Cougars on top 81-79 with 27 seconds remaining in regulation. However, Maple Leaf Freshman, Keshia Ward, hit a jumper in the paint just before time expired to send the game to overtime.

In the first extra period, SAU player Johnson hit a jumper to put the Cougars in front with 34 seconds left. But the Maple Leafs refused to go away quietly as Junior Jo’Mani Thomas scored on the other end to force a second overtime.

Midway through the second OT, Goshen College had difficulties as Spring Arbor had a lead in the second time when they were winning 97-94. However, Thomas posted back-to-back buckets to give the visitors a one point advantage. Goggin would tie the game once again but Thomas responded one more time hitting a shot just before the horn.

The Maple Leafs held a substantial edge on the glass, out-rebounding Spring Arbor 73-36. With the 73 rebounds, Goshen sets a school record that was previously set in 1986.

“I have never been a part of a game quite like this,” said Goshen College head coach Stephanie Miller. “Neither team could get control, yet neither team would quit or back down. We were simply awful at ball possession and they were very strong in that area, but they struggled to control the glass and we absolutely cleaned that up.”

“This was a gritty test of mental toughness today, and I’m so proud of how hard we worked to keep our calm and focus despite how crazy the game was,” added Miller. “There was no way we would have won a game like that a year ago. We always kept our composure and never gave in to the situation. It was mature, it showed a lot of heart, and I was proud to be a part of it.”

Goshen College women’s team will play against Grace College on Saturday at 1 p.m.