December was a fabulous month for independent Goshen folk band Moral Circus. GC seniors and members Phil Scott, Henry Stewart and Lauren Treiber, all seniors, not only received more than three times as much money as they needed to fund their first studio album, but they were also featured in Independent Music News’ Staff list “Discover 50 Independent Artists in December.” Moral Circus’s debut album, “Set in a Stem,” was also released. 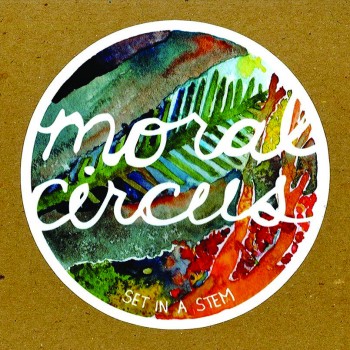 In September 2011, Scott, Stewart and Treiber performed the song “Goshen” by Beirut at Kickoff, and they had so much fun making music together that they decided to continue and eventually formed Moral Circus. All three members sing and play guitar and percussion, with Stewart and Treiber also playing keyboards, Scott playing bass, and Treiber contributing melodica and Stewart playing accordion on several tracks. By fall of 2012, Moral Circus had written two of the nine tracks for “Set in a Stem,” and in the summer of 2013 the band decided to live together in order to finish writing the remaining tracks.

“Over the course of the summer we wrote seven songs and began recording,” said Scott. “We finished recording in late October. We recorded with Joel Jiménez at The Art of Bea Studio here in Goshen.”

Once the album was complete, Moral Circus hoped to make their completed album available for purchase, but needed a little bit of financial help to reach their goal.

“We had made a bit of money together as a band over the past few years, but by the time we finished recording, mastering, and producing the CDs we were about $500 in the hole,” said Scott.

The band decided the best thing to do would be to start a Kickstarter campaign where people could pledge money to support the release of the album. Scott said that the band hoped to raise $500 so that Moral Circus could “minimize our out of pocket expenses.”

“Our Kickstarter was a wonderful experience,” said Scott. “We were overwhelmed by the amount of generosity and support shown by our friends, family and fans.” In 24 hours the band had raised 97% of the money they needed, and when the campaign finished roughly three weeks later, Moral Circus had raised $1700, more than three times the amount they had hoped to receive. Two days later, the band was thrilled to discover that they had been featured in the Independent Music News article.

So what’s next for Moral Circus? “There may be a few mini projects we will take on this spring. After that, it’s all up in the air,” said Scott. “We will be graduating and are currently in the stage of figuring out our lives. If by chance or decision we end up in the same place that would be fantastic.”

The band promises performances this spring, but has not set specific dates yet. Those interested in keeping up-to-date on the latest news should like Moral Circus’s Facebook page.

“Set in a Stem” can be heard on moralcircus.bandcamp.com, and information on purchasing the album is also provided on the site.