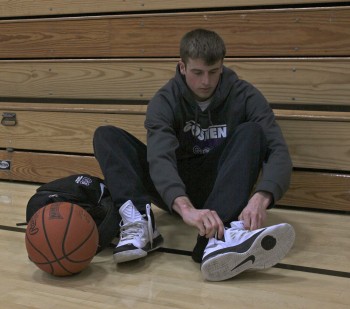 Jake Clemens warms up before a practice.
Photo by Mandy Schlabach

Being a student athlete can sometimes be a balancing act. Staying motivated both in the classroom and in athletics has its challenges. In an effort to commend the hard work of athletes who are excelling in both areas, the NAIA recognizes juniors and seniors with an accumulative grade point average of 3.5 or higher with a scholar-athlete award.

Student athletes like senior nursing major Ali Beitler learn to establish a balance with athletics and class workloads. Beitler said that the key to that balancing is “looking ahead and knowing what needs to be done, when.”

Beitler has been on the track and cross-country team all four years of college while maintaining above a 3.5 grade point average. Last year, Beitler was named to the Daktronics-NAIA Scholar-Athlete program for her efforts on and off the racetrack.

“It’s like beating a dead horse in saying that you need to be organized, but you do. I’m not always good at that but you need to give yourself a break,” said Beitler.

Another scholar athlete awardee, junior biochemistry major Jake Clemens, works to apply his basketball coach’s brick-by-brick mentality to his school work by focusing on taking it a day at a time. Clemens plans to go onto medical school in the future and sees his time at Goshen as a student-athlete to be a “building block” for that.

“Sometimes I look forward to practice after a long day of classes just because I need to clear my mind. It’s a good way to blow off some steam,” said Clemens.

It’s student athletes like Beitler and Clemens that helped set a new program record of 51 scholar-athletes during the 2012-13 academic year. Goshen College takes pride in developing students as well-rounded individuals both inside and outside of the classroom.