Queer erasure and representation in Gadfly 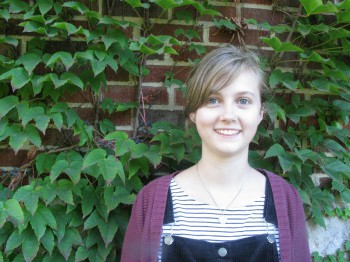 Hayley Brooks, a junior, lends insight to her thoughts on GADFLY. Photo by Kate Stoltzfus

When I came out in The Record a little over a year ago, I knew it wouldn’t be the last time I came out. In fact, the choice to come out in such a public fashion was strategic, planned and carefully implemented because I know my body, I know my identity and I know the ways those two things intersect and are understood by other people. As a femme lesbian, my stories, histories and identities are invalidated, erased and ignored on a near daily basis. The stories of my community, of lesbian culture and queer culture in general and of women are relegated to the margins, are shunned and cast as Other. I cannot turn on the television, look at a magazine, go into any store or watch any commercial and expect to see images and stories that are representative of my experiences and my communities as a lesbian. If by chance I do see these images, they are often stereotyped, over dramatized or simplified and inaccurate.

In that vain, when I hear or see a story that in some way involves queer characters, especially queer women, I am interested. If a TV show has a queer female character, I will watch it no matter how poorly-written she is. When I read Daniel Hess’s “Menno Pause Revisited,” on The Center for Mennonite Writing, I became interested in Jim Wenger’s story. Jim Wenger was one of four editors of Menno Pause, a controversial underground newspaper published at Goshen College in the late 1960s. The four editors were eventually expelled, for both the publication and other concerns.

Hess said, “When I was finished, the president reached for his desk drawer, pulled out a Berkeley Barb, opened to a page of personals, ran his finger to one particular item and had me read it—a solicitation for a male partner from our own Jim Wenger.”

While I crave and want to see positive images and stories about the LGBTQ community, I don’t live in an idealized world where I can ignore when members of my community are faced with the burdens of homophobia and heterosexism (among other oppressions the LGBTQ community faces, such as misogyny and sexism, transphobia and cissexism, racism, ableism and others). I do not enjoy hearing stories of discrimination and oppression, but I know I need to hear them, because they are a part of the history of my community and my own history. I have experienced and continue to experience homophobia and misogyny and need to know that I am not alone in this struggle, that I am not the only body carrying these burdens. So while hearing Wenger’s story was painful and disturbing, it allowed me to place myself within a larger context at Goshen College. I know Goshen College has come far from the days of expelling queer students for being queer, but reading this story was validating and I better understand my experiences as a queer femme woman at this college as a result.

With all that said, I was expecting to hear some of Wenger’s story in Gadfly, a play depicting Sam Steiner’s life. Steiner was also one of the four editors of Menno Pause. After Steiner and Wenger were expelled, they moved to Chicago and lived together in an apartment. While I enjoyed the play and thought it was well done, I found it problematic that Wenger’s story was completely erased from Gadfly. It seemed that Wenger had an effect on Steiner’s life and as result, I left the show feeling disappointed and reminded of the ways my community has been erased and continues to be erased from history. I took the time to remember the ways the histories of Ruth and Naomi, Jael, David and Jonathan, Jesus, Mary Magdalene, Rahab of the Bible, as well as the narratives of historical figures such as Virginia Woolf, Walt Whitman, Eleanor Roosevelt, Willa Cather, James Baldwin and Bessie Smith have been understood within a white, male, cisgender and heterosexual framework and the ways I have learned to remember those histories and narratives as queer.

While I do not take this experience for granted, nor wish that I did not experience it, I worry that other members of the audience did not have the same context I had coming into the play. I knew of Wenger’s story and was expecting at least some exploration of Goshen College’s history (and continued history) of homophobia and heterosexism. Even though Gadfly was not written by members of the Goshen College community, the producers and writers of this play are still implicated and responsible for accurately portraying this community and its history. The play cannot be removed from the context of a longstanding history of queer erasure and misrepresentation. While I appreciated the themes of active pacifism and social change, I wish my community and its history would have been included in this dialogue.