Goshen’s fall semester Kicked off with sultry country tunes, bags of women, original songs, and freshman out to share the talents they are bringing to GC. The Price is Right themed event ran two hours and covered 13 acts with breaks padded by games and MC-ing by Angel Eriberto Reyes, a junior.

Both the first and second place winners of this year’s Kickoff were acts that had never before graced the stage of Sauder Hall.  First place went to “The Bag Ladies”—six Goshen College women suited up in brightly colored amorphous bags. The unidentifiable women were Emma Caskey, a sophomore, Alia Munley, Sam Weaver, AnikaBaumgartner, juniors and Bekah Groff and Lauren Slone, seniors.Philip Longenecker, David Bontrager, Ike Lehman, and Jacob Roth, all freshmen, claimed second place with their original song “Background Check.”

The idea for “The Bag Ladies” came from Hayley Brooks who found a Youtube video of a similar bag performance. Caskey, the last to join the team, said the video was shown to her in the cafeteria and she cried it was so hilarious.

The audience reaction was, according to Caskey, extremely energizing.

“We had been rehearsing so long we had forgotten we were funny,” she said.

Caskey also found the lighthearted nature of many of this year’s acts refreshing.

“Kickoff is becoming less of an event only for the elite and I think our act gave people permission to be creative,” Caskey said.

The group wasn’t expecting to win but it was convenient because the prize money will go toward, though not cover, the cost of the bags.

Paul Zehr, a sophomore and resident assistant on Kratz 3 sings a song for his floor every night dubbed “Girls off the floor” to announce the 11pm curfew. “Background Check” originated through messing around with that chord progression and some soccer preseason discussion.Longenecker and soccer mateswould joke about how awkward it would be if you were into a girl you turned out to be related to.

Said Roth, “The song was playing off of a bad Mennonitestereotype.”

Said Longenecker, “Mennonite men are also great cooks,” referring to the chorus of the song that stipulated Mennonite women quilted, sewed and were wonderful cooks.

More than just performers were given the opportunity to take the stage Saturday night. Fate and random seat selection brought BenjiThapa , a junior, to Contestants row, the front row of Sauder, and then to the stage. Thapa participated in one of the three Price is Right games. His opponent, the Plinko board—a board made up of a maze of nails. If he could maneuver a hockey puck to drop into the winning slot, he could take home a flat screen TV. Incidentally,Thapa was successful on the first try. Reyes had him drop it twice more to finish the game and the second time the puck again tripped into the center slot.

“Winning made this year’s Kickoff a great experience,” said Thapa.

Levi Yoder, a freshman, also had an opportunity to win a prize–Beatsheadphones—by guessing the prices of items including donuts and shaving cream. Yoder didn’t manage to come close enough to the actual prices to win, but it didn’t hamper his spirits.

“The game was fun and I have no regrets about it. But I swear the prices are higher in California!” said Yoder who is from San Francisco. 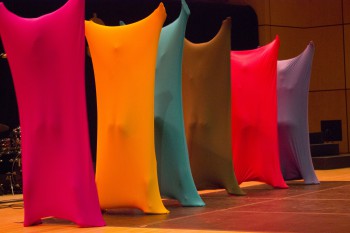 A dance by "The Bag Ladies" was the winning act at Kick-off. Photo by Alia Munley.