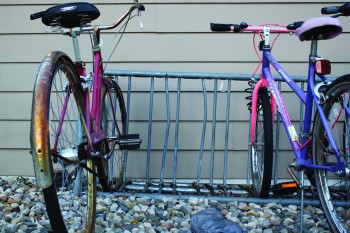 Police are working to solve a string of bike thefts around campus and the Goshen area. Photo by Hannah Sauder

Kara Hostetter, a sophomore, locked her new bicycle under the awning at the Recreation Fitness Center to keep it out of the rain, but when she returned a few days later on Sunday, Sept. 6 to retrieve it, the bike was gone.

Hostetter is one of the four victims of reported bicycle thefts that have taken place on campus since classes began in early September.  According to Al Mackowiak, director of campus safety and security, two of the other thefts took place outside of Wyse Hall and another outside of Kulp Hall.  Two faculty members and two students have been reported victims.

Bicycle thefts have gained local attention beyond GC’s campus. Recently, Michael Dickens, a Goshen resident, proposed a Bike Theft Abatement program.  Under the program, which is currently raising monies through a fund in the clerk-treasurer’s office, bicycles equipped with GPS tracking technology would be used as bait to lure thieves and catch them.  The program is still under proposal.

“It is our understanding that the Bike Theft Abatement proposed project, if it comes to fruition, would provide the financial resources by which tracking devices for a bicycle will allow officers to track a bait bike without having to sit in close proximity,” said Tina Kingsbury, Goshen Police Department administrative assistant, in an e-mail on Tuesday.

Currently, the Goshen Police Department uses a “bait bike operation,” which entails an officer in close proximity watching a bicycle until it is taken by a thief.  So far, two arrests have been made under the operation.

“Our department cannot provide details pertaining to current investigations, so the specifics of our ‘bait bike’ operation and suspect information remain confidential,” said Kingsbury when asked if the Goshen Police Department would ever use the program on GC’s campus. “Our focus are those areas of the city which have had the most reported cases of bicycle theft and we always obtain the owners’ permission prior to placing our bike on their property.”

Kingsbury said that 16 bicycle thefts were reported to the Goshen Police Department during the thirty days prior to Tuesday.  None of these were reported on GC’s campus.

Mackowiak suspects that many bicycle thefts on campus are perpetrated by people outside of the campus community.

“I think it’s someone from off campus,” he said.  “When the students are back, you have plenty of bikes to choose from.  It’s a matter of going shopping.”

For Hostetter, a stolen bike leaves little hope for its recovery, according to Mackowiak.

“Sometimes the bike can be returned to you,” he said.  “The odds of getting your bike back are not very positive.”

“I understand the comfort level and everything,” Mackowiak said of GC’s campus culture, “but be smart about how you protect your property.”

He advises bicycle owners to secure their property with a bike lock.

“I prefer a heavy duty one,” he said.

Both Mackowiak and Kingsbury advise bicycle owners to register their bikes with the city of Goshen.

“It is difficult to return property for which we have no serial number on file for the victim,” said Kingsbury.  “Every year, many bicycles go unclaimed.”

Anyone can register a bicycle with the city at the physical plant for a fee of $5.  They can also register their bicycles for the same fee at the Goshen Police Department during regular business hours or on Saturdays at the Goshen Fire Department on College Avenue.

If a bicycle appears to be missing from campus, Mackowiak said that students should call campus safety to file a report with the on-duty officer.  The officer will also assist the victim in filing a report with the Goshen Police Department.