GC named radio, TV school of the year second year in a row 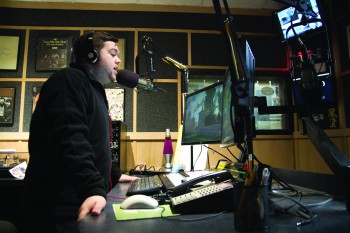 For the second year in a row, Goshen College’s radio station, WGCS 91.1 The Globe and GCTV have been named Radio School of the Year and Television School of the Year, respectively, by the IASB College Broadcasting Competition.

Out of eight schools, including Ball State University and Huntington University, known for their broadcasting programs, Goshen College was the recipient of both awards, something that had never happened prior to last year, when Goshen won both awards for the first time.

Goshen College was the smallest school in the competition, going against some radio and TV teams that were larger than Goshen’s student body.

When asked how it felt to win both awards again, Jason Samuel, WGCS general manager, said the words “proud” and “humbled” came to mind.

“Students work hard and they do it well,” said Samuel. “Judging is so subjective, you never can tell how things are going to turn out. It is a huge accomplishment to repeat.”

Benjamin Kelly, sports director at The Globe and sports anchor at GCTV, was satisfied when hearing the results of the competition. Kelly said it was reaffirming to know that they were on the right track, and that they were capable of competing against schools at the top level.

The Globe operates differently from most college radio stations. Many utilize what is known as “block programming,” where the station will play two hours or so of a certain genre of music before moving onto another block of time for a different genre of music. The Globe, however, operates more like a commercial radio station, focusing on one genre, in this case, Triple Americana.

Samuel added, “Duane [Stoltzfus, professor of communication] has assembled an amazing team and faculty, and allows us to explore, experiment and make mistakes. We couldn’t have done it without him.”

In addition to being named television and radio school of the year, several sophomores, juniors and seniors were recognized for their contributions to GC broadcasting.