Math for indoor marathoners: 1 lap down, 203 to go 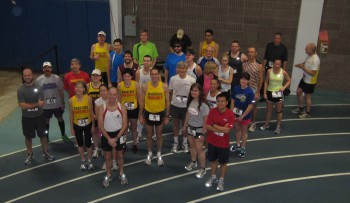 70 runners will participate in the fifth annual Maple Leaf Indoor Marathon this weekend, at least half of them running back-to-back races.

The marathon on Saturday begins at 8 a.m., and the one on Sunday at 7 a.m.  The 26.2-mile race consists of 204 laps around the newly refurbished track inside the Recreation-Fitness Center at Goshen College.

“It’s the middle of winter, so the idea of being able to run a marathon inside is appealing,” said Doug Yoder, the race director and coach for the Goshen College track and cross-country teams.

Of the 70 entrants, 53 are from outside the Elkhart County area, traveling from states such as Kansas, Louisiana, Massachusetts, New York and Pennsylvania. In the past, runners have also come from as far away as California and Canada.

Some of the runners are associated with the group known as Marathon Maniacs, which sets a minimum requirement of running two marathons within a 16-day period to qualify for club membership at the bronze level; the iridium level, on the other hand, specifies that the runner complete two marathons within two days.

Yoder, who ran two and a half marathons last year when the event included three marathons over the weekend, will not be running this year. He is nursing a hamstring injury.

Another past competitor, Melissa Gillette, who set a female indoor world record of 3 hours, 8 minutes last year, is also skipping the event, due to pregnancy. That indoor record was eclipsed at an indoor marathon in Minnesota in January.

The best Maple Leaf time on the men’s side is 2 hours, 59 minutes, held by Gary Krugger from Edinbora, PA. He will not be competing this year.

Yoder said that Jake Gillette, a Goshen marathoner who has run close to that time and is “in good shape,” could break the record. “I’m sure that going after that record is in the back of his mind,” Yoder said.

The money raised will benefit LaCasa Inc. of Goshen and Hemophilia of Indiana.

Spectators are welcome and can find the race by following the music. Yoder draws from his personal collection to provide background music. His tastes skew toward 70s and 80s rock, including Led Zeppelin and Rush.

“The runners have to put up with what I like, but I will say I’ve had compliments over the years,” Yoder said.