Winter One Acts take the stage this weekend 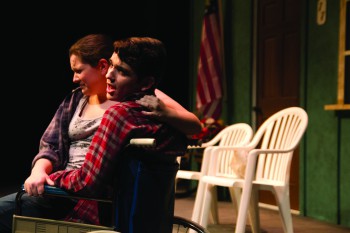 The Goshen College Winter One Acts will take the stage this weekend in the dual form of theater acts and film shorts—some new and some old.

“Seldom is Heard” will appear in the Umble Center for the first time. The one act play, written by Mary Steelsmith, was runner-up for the 2012 Goshen Peace Play contest. The one act is directed by Nathan Vader, a senior, and the story follows the return of a wounded soldier from the war in Afghanistan to his wife and quiet home community in the Midwest. Vader hopes that the play’s themes will shed light on how communities respond to violence.

“Steelsmith has shown the cruel irony of a nation that tries to live peacefully even while sending people to war,” Vader said. “Many of us know firsthand that it’s easier to ignore suffering than allow it to become a part of our homes and communities.”

Next, “Degas, C’est Moi,” written by David Ives and directed by Phil Weaver-Stoesz (’12), will take the Umble stage for the second time after debuting last month as the final piece in Billy Funk’s senior show. However, the remounted piece will follow the original script this time around, as the first showing’s ending was changed so Funk could propose to fellow actor—and eventual fiancé—Alita Yoder.

The Winter One Acts will conclude with the screening of various film shorts created by Samuel Jones, a senior, and Jacob Landis-Eigsti, (’11). Jones’ pieces “Drift Along” and “Ice Fishing” are reflective pieces that combine music from the artist Takenobu with poetic images. “Drift Along” exhibits Jones’ recent exploration with stop-motion cinema.

The Winter One Acts will be held in Goshen College Umble Center Friday, Feb. 15, at 8 p.m., Saturday 16 at 3 p.m. and Sunday Feb. 17 at 3 p.m. The Sunday performance will be ASL interpreted.

Tickets cost $3 and are available at the Welcome Center by calling (574) 535-7566, emailing welcomecenter@goshen.edu, online at goshen.edu/tickets or at the Umble Center Box Office an hour before the show.