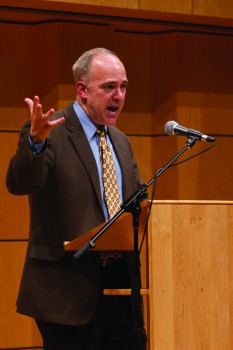 Daniel Philpott, author, professor, peace advocate and lecturer for this year’s Yoder Public Affairs Lecture Series, began his discourse in Reith Hall on Tuesday night with a light anecdote on the topic of his lecture—titled “Reconciliation in Politics? On the Meaning of Justice in the Wake of Massive Injustice”—in the context of a Mennonite-affiliated university.

“I must admit,” said Philpott, “speaking about peace in front of so many people in the Mennonite community feels like being a beginning medical student lecturing to the American Medical Association.”

In actuality, Philpott’s credentials in peace work are extensive. Philpott received his master’s from Harvard University in 1995 before beginning a job in Santa Barbara, Calif., that led him to discover his life’s work in reconciliation.

“In California I met a pastor who worked in reconciliation,” said Philpott. “Two months later he had me on a plane with him to Sarajevo. Though it was only five days, [this trip] had an impact on me that captured me.”

Sarajevo was where Philpott began his journey in learning about and understanding the ethic of reconciliation within the context of atrocity, or in the aftermath of it. At the time of his arrival it had been three months after the Dayton Accords–a peace treaty signed after a massive civil war in the former Yugoslavia–and the country was in a state of reconstruction.

“Ever since, reconciliation has been my profound calling,” he said.

Now, Philpott is a professor of religion and global politics at Notre Dame’s Kroc Institute for International Peace Studies, as well as having recently authored several books—including one that was published this year, titled “Just and Unjust Peace: An ethic of reconciliation in politics.”

“Just and Unjust Peace” is already being thoroughly studied by peace, justice and conflict studies students in Joe Leichty’s Reconciliation course. Leichty and Philpott have been colleagues for some time, having met eight years ago at a conference sponsored through Gordon College.

Ever since, Leichty said, “I’ve made it my business to keep my eye on his work.”

Philpott appeared for lecturing and discussion on campus twice on Tuesday. The first was a more informal lecture with Leichty’s students, followed by an in-depth question and answer session. The second was the Yoder Lecture Series, in which the lecture was more content-heavy and the question session more brief.

For both sessions, it was clear that Philpott’s central passion—justice created with reconciliation—had been enacted through his life’s work and research, and well-presented through his publications on the subject.

And, though an ardent advocate for peace, Philpott is also a tried and true realist.  His viewpoints on the difficulty of reconciliation presented his ideals of peace making in a more realistic manner.

“Reconciliation is not some utopian state where people go around hugging each other,” Philpott said in his afternoon lecture with Leichty’s class. “It is political reconciliation, where people respect each other’s rights as citizens, that makes a difference.”