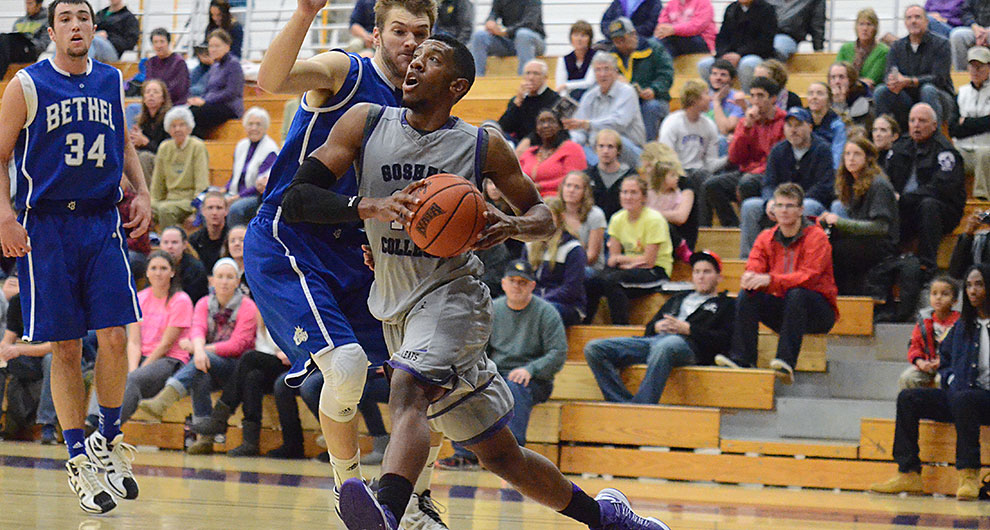 In what is always a competitive matchup in the Crossroads League conference, the visiting Bethel College Pilots had a pair of big runs during their matchup against the Maple Leafs Tuesday night, beating the Leafs by a final score of 99-85 in men’s basketball.

The highlight of the night for the leafs was Jerron Jamerson, a junior, who scored a career-high 27 points and went 10-of-15 from the field. Jamerson also brought down 10 rebounds for the Maple Leafs, earning his first double-double as a Maple Leaf.

The Maple Leafs got off to a rough start, as the team missed six-straight shots after Stefon Luckey, a sophomore, made an early three pointer. The Pilots went on an 8-0 run to open a 10-3 lead in less than three minutes into the contest.

However, the Maple Leafs responded with a run of their own, going on a 21-4 run that was sparked by a steal and dunk by Jamerson. The run was capped off by a pair of three pointers by Tavo Parral, a senior.

The Pilots, however, responded and went on a 19-0 run to go from 12 points down to seven points up in less than five minutes of game time. And even with Jamerson’s impressive 16 points in the first half, the Leafs were down by six at the intermission.

In the second half it was all about the Maple Leafs’ Matthew Martin, a senior. Martin hit four-straight-three-pointers, however Bethel regained control and maintained control as the game was quickly ending. The Maple Leafs could not regain their early lead, and fell to the Pilots.

Martin had a season high 19 points, while Parral and Kyle Davis, both seniors, drew in 11 points and 10 points respectively.

This lost was the first home loss for the Maple Leafs, who fall to 6-3 on the year and 0-2 in Crossroads League play. The Leafs are back in action Saturday as they travel to Saint Francis to take on the Cougars at the Hutzell Athletic Center. Tip-off is set for 3 p.m. in Fort Wayne.