Underpass open after months of construction, years of planning 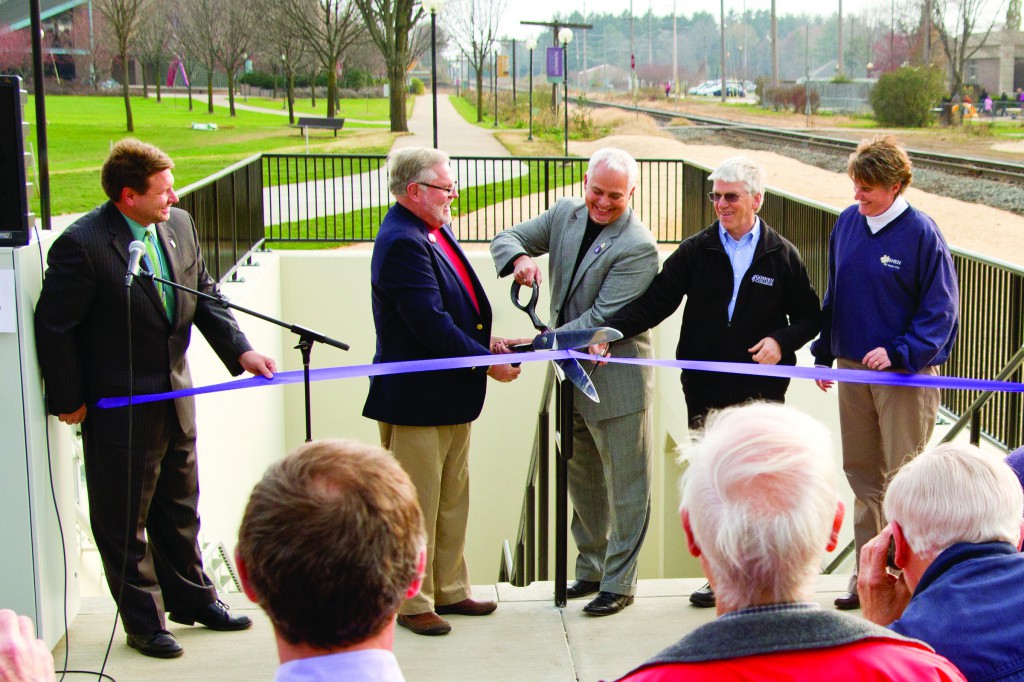 A crowd of about 20 spectators gathered last Friday to watch President Jim Brenneman cut through a thick purple ribbon. The break of the ribbon, snipped with giant scissors to the cheers of onlookers, marked the official opening of the Winona Trail Bike and Pedestrian Underpass.

“For 50 years students have had a reason to be late to class,” said Brenneman. Now, with the tunnel’s opening, students can no longer use a train as an excuse.

The underpass, a 10-foot, well-lit tunnel which allows students to cross under the tracks when trains pass through campus, is a culmination of months of work. Construction began last April and the main passageway under the railroad was completed in a mere 24 hours on July 4. Its dedication was delayed several weeks due to an issue with the handrails but the pass is now officially open for use, both on foot and on bike.

The dedication, which was organized by sustainability coordinator Glenn Gilbert, opened with remarks by Brenneman, who thanked the many people who spent hours working on the project as well as everyone for their patience during the tunnel’s construction. He said the tunnel will benefit not only students but community members as well.

Allan Kauffman, the mayor of Goshen, also spoke about his days at Goshen College. He remembered sitting in a physics class when a train derailed on campus.

“Dr. Buschert dismissed class and we did all the things we weren’t supposed to do,” said Kaffuman. “I collected items that had fallen off the cars and probably kept them in my dorm room for awhile.”

One onlooker in the crowd, Vonda Litweiler, reflected on campus life before the underpass.

“I think [the underpass] is definitely worth it for the safety of the students,” said Litweiler, a 1990 graduate. “When I was here, I remember not everyone did what we were supposed to when trains stopped. Many people climbed through.”

Said Gilbert, “No more excuses for being late. You start multiplying the number of people waiting for the train times the number of minutes. It’s a significant productivity improvement for us.”