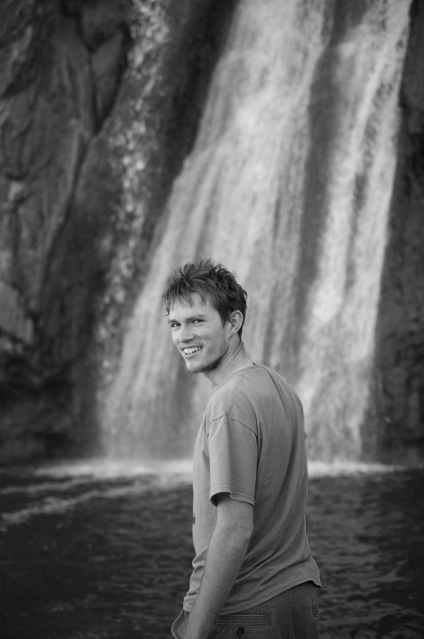 “300 megabytes; what was I thinking?!” goes through my head as I struggle to contain rippling exasperation in the furrows above my brow. Perched beside me on that worn blue mattress is my host dad, Meimon, who’s also staring at his new Pentium III, 9.4 GB hard drive, IBM Aptiva—a blast from the past. 300 MB. That’s how much hard drive space was left when I pressed Next on the WAMP server installation; fingers crossed, I ignore the “Espace disque faible” error messages (why does French seem so appropriate?) as the installer’s green bars pound on by. And then it’s done, finished, installed. I breath a sigh of relief, greeted by yet another pop-up. This time a number catches my eye: 8.4 MB of disc space—left.

Such is the life of Tazouta’s new web page designer, charged with putting a town of several thousand in the Middle Atlas mountains on the web. Yesterday morning I took an hour-long bus ride to Sefrou, a small city about 20 miles away. It was a cool, wet day, but most shops were open, and after venturing down one of the larger medina alleys, I found a cyber cafe. Three hours later I was approaching Tazouta, packed into the front seat of an ancient Mercedes taxi, flash drive in pocket. I smiled, thinking of all those just-downloaded programs, ready for the desktop back home, goodies only a webmaster can enjoy. Mission accomplished–or so it seemed.

I am now aware of just how interesting this service project has become. I can deal with “Designed for Windows 98” machines, no Internet access and French operating systems, but telling my understandably jumpy host dad that I think I backed up all of his photos and music on my flash drive before deleting them is just plain stressful. I later notice that strange .exe’s have also been “backed up” on my flash drive from what seems like a herd of trojan horses. Coffee break, anyone?

Meimon gets up to run a load of grain through his mill next door. Sacks of corn, beans and wheat are brought in 60 kilo bags on donkeys, weighed and then pulverized. It’s pretty cool to see, the grinder with its flapping rubber belts syncing gears and axles in a cloud of dust. A half hour later Meimon is back, looking over my shoulder as I do some boring installation procedure, a question on his lips. “Do you have any photos?”

He opens my flash drive and clicks “Slide Show.” A horde of guys, carrying a duct-taped Martin Hofkamp through Java Junction fills the screen. Next he’s in the fountain—just one of many showerings stored in the only folder on my flash drive: “Yoder II highlights.” I try to explain (or conveniently overlook) photo after photo of inside jokes: Josh Yoder’s pet rock, the “Jared Miller AVI Fresh employee of the month” snowman, Henry Stewart’s duct-taped boxers on the Appalachain Trail, all culminating in shots from Project Hindenburg, a sketchy science project. Meimon thanks me, not sure what to think, and we head home. It’s time for tea.