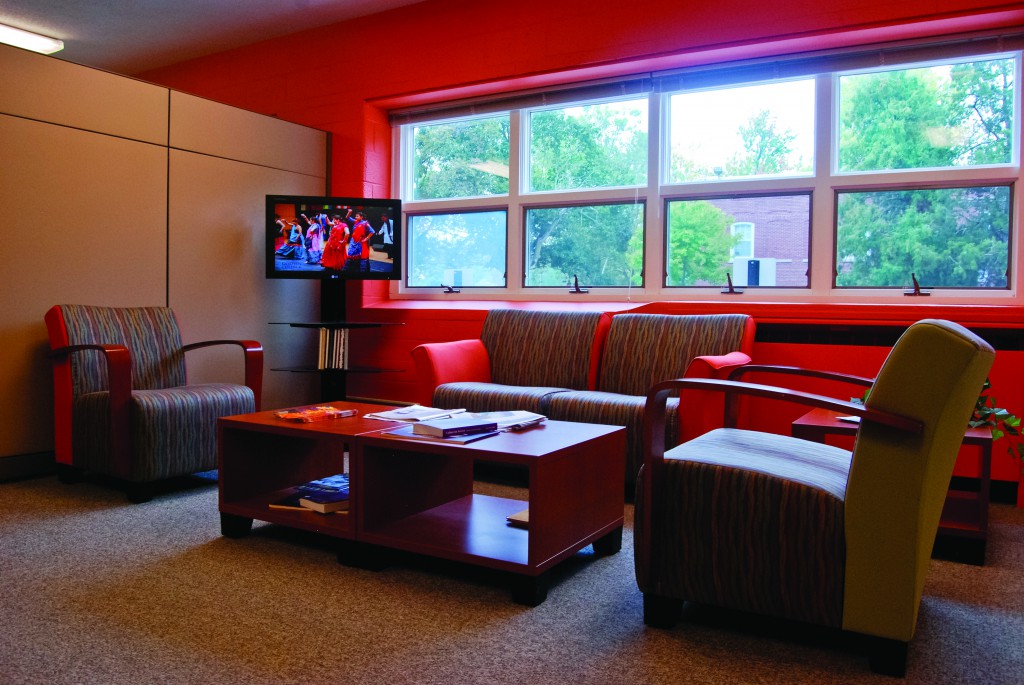 Goshen College students living off campus will have to wait until mid-November to use the new commuter lounge, but Bill Born, vice president of student life, thinks it will be worth the wait.

The Union building commuter lounge is being refurbished, but with a few complicated twists. Originally, the college planned to situate the new and improved commuter lounge in the former quarters of the Center for Intercultural Teaching and Learning in the north annex of the Union, Born said.

But when James Townsend arrived as vice president for enrollment and marketing, he persuaded the rest of the leadership team to reserve that annex for the Welcome Center. The commuter lounge, then, was staying put at in the south end of the Union – but with more space.

DJ Construction, which is handling the renovation, has been asked to finish by Nov. 15.

Students can expect the new commuter lounge to be more than twice the size of the old one. Although some features of the lounge will remain the same, such as the ID card entry control system and the kitchen, the study space will be enlarged.

The design includes drop ceilings, improved lockers and three new computer stations. The lounge will function as an island for thoroughfare.

Though a new geothermal heating system has been added to the Union, Born said, the renovated lounge will be heated separately.

“The lounge stands by itself in the Union building, and due to its location, it will continue as a stand-alone facility,” Born said.

The expansion and renovation of the commuter lounge may be a welcomed change for many students living off-campus.

Chenoa Mitchell, a junior public relations major who lives off-campus in Elkhart, is “glad that the commuter lounge will expand, because last year it became somewhat difficult to study there due to its small size and the amount of students who used it.”

The number of commuter students is growing, Mitchell said, and these students would benefit from a bigger and better place to study and relax.

However, for some students, such as Mitchell, the two-month delay may be hard to wait for.

“I’m pretty frustrated with the delays,” Mitchell said. “We as commuters really do need a place where we can keep our stuff, or rest, or study, or prepare our food, and we don’t really have that opportunity without a commuter lounge,”

According to an email sent by Judy L. Weaver, an academic counselor in the Writing Center, there are no longer lockers or kitchen facilities available in the lounge due to the construction.

“I appreciate that the lounge is being completed, but when I received the email saying that it wouldn’t be finished until November and that we wouldn’t have any lockers or refrigerator, that was pretty distressing,” Mitchell said.

Bill Born urged commuter students to take a longer view. “Long-term decisions such as this one affect the college in many ways,” Born said. “This is an investment with future students, staff and faculty in mind. I would hope that these next few months fly by, and relative to the long term benefits of the project, I think it will be worth it.”

The renovated commuter lounge will be a step forward for addressing the needs of students such as Chenoa Mitchell. “I think having a bigger lounge with better facilities would make me feel like I was valued more as a student here.”