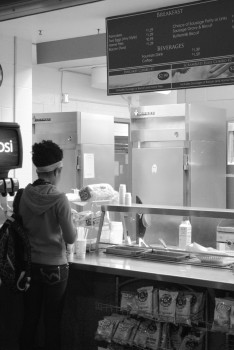 AVI Fresh, the food services provider for Goshen College, opened the academic year with significant changes in administration and the Leaf Raker menu.

It was the change in the Leaf Raker menu that drew the most attention. Students who went to the Leaf Raker on the first day of classes discovered that several options had been discontinued, including chicken tenders, chicken quesadillas, specialty sandwiches and ice cream.

According to Tyk, the menu changed after a meeting between AVI Fresh and Goshen College staff over the summer. They agreed that one of the major concerns was the waiting time in the Leaf Raker. After discussing this issue, AVI Fresh decided to speed the process by simplifying the menu.

Simplifying does not necessarily mean satisfying. Jimmy Cassoday, a senior, said, “Why were students not invited to this meeting? At the end, the students are the ones being affected by this decision. This is a Student Life issue, but the students never took part in this decision.”

Kayla Schwartz, a senior, said, “It is just not as good as it used to be. The Leaf Raker was the best place to eat on campus, and now it’s the same as the Rott, and it upsets me.”

After hearing from students, Tyk said, AVI Fresh decided to return chicken tenders and chicken quesadillas to the menu. A new menu item that was not available last year are fruit smoothies.

Lexi Kantz, a junior, said the waiting time at the Fraker can still be long.  However, she appreciates that “the prices and atmosphere are relatively the same.”

Kantz added that she is grateful for the picnic table and plants added outside the dining area.

Matthew Amstutz, a senior, said he is thankful for the return of the quesadilla, but also for AVI’s listening ears in the process.

“I wish that students would have been consulted a bit more regarding alternative eating locations,” Amstutz said. “That being said, I appreciate their efforts to listen to us now.”

Tyk said AVI Fresh remains open to conversation with students to address their complaints and field their requests.

According to Tyk, AVI’s main focus is to please the students. “That’s our No. 1 concern: make everyone happy,” Tyk said.

He also mentioned that AVI Fresh is working to hold a forum at which students can express their complaints and communicate their wishes.

“We can’t make all the changes happen at once, but we are accepting students’ requests, and we are visualizing that by the beginning of next semester we can make those changes happen,” Tyk said.

Despite the changes at the Leaf Raker, sales have held steady, he noted.  “The Leaf Raker remains a very common place for students to come and eat,” he said.

Tyk encourages students to email him directly with any concerns or requests at gtyk@goshen.edu