Peter Illyn to present at convo 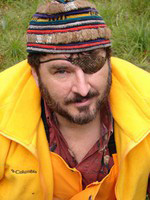 Peter Illyn is an evangelical pastor, avid hiker, specialist in social media, environmental activist and leader in bringing Christian faith and environmental stewardship together. His success in reaching the church community with a message of environmental stewardship has been featured on CBS Evening News, CNN, Outside Magazine, Charisma and Christianity Today, among others. On Monday, Illyn will present “Why Modern Christianity has Abandoned Kinship with Nature in a Mechanistic World” in convocation.

Illyn, who grew up in South Carolina as a Russian Orthodox, graduated from Rhema Bible College as an evangelical minister. He worked in Portland, Ore. and Yakima, Wash. before he returned to get his undergraduate degree in marketing.

After graduation, Illyn took two llamas, Frank and Jesse, on a four-month, 1,000 mile trek through the Cascade Mountains. He went into the mountains as an evangelical minister, but came out an environmental activist. According to Illyn, “I believe God made a good earth and I am called to be a good steward, to protect the fruitfulness and connectedness of creation.”

During the early 90s, the federal judges ruled logging of the Douglas fir forest ecosystems as a major factor driving the spotted owl to extinction and endangering the trees. This caused tensions between the small lumber towns, who benefited from the mills, and the environmentalists. When Illyn was on his trek, he realized that, if we truly love the Creator, we need to care for all creations. He believed that to destroy what God had created is foolish and hard-hearted.

After he returned from this trek, Illyn started a wilderness outfitting ministry, taking families and small groups onto the wilderness areas surrounding the Cascade volcanoes. This was the beginning of Restoring Eden in the early 1990s. Although evangelical, Illyn works with Catholics, Orthodox, mainline Protestants, and Jewish leaders. He joined other religious leaders at Congress and convinced them not to dismantle the Endangered Species Act.

All these efforts came together as Restoring Eden, a Christian environmental stewardship organization based in Washington state, that is focused on helping Christians rediscover the biblical call to serve, protect and love the environment and all of God’s creations.

Illyn returned to school for a Master’s degree in social marketing, combining his three passions: Christian theology, the environment and social marketing. He is the founder and director of Restoring Eden, whose aim is: “Making your heart bigger, your hands dirtier, and your voice stronger, for God’s creation.”

Paul Steury, assistant professor and K-12 education coordinator at Merry Lea, urges students to attend the convocation on Monday, “Peter is a good friend of mine and he will be addressing climate change and what we as Christians, and a Christian school, can do about it. It is important to talk about virtue and the lack of virtue which leads to all problems, especially the environmental ones.”