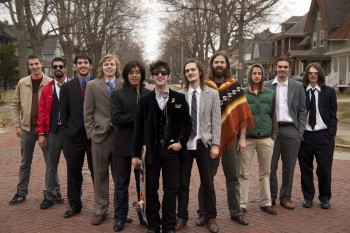 Playing sweet melodies of funky surf rock, the vivacious group of 11 band members formally known as the Kansas Bible Company will return to Goshen to play at the Goshen Theater tomorrow night. These former Goshen College students will make their way from Nashville, Tenn. to show First Friday goers their journey, “to the stars through rugged ways.”

The show begins at 8 p.m. as a part of the musical entertainment of this month’s downtown Goshen events. Jason Samuel, communications professor and general manager of 91.1 The Globe, will emcee this free event sponsored by Downtown Goshen Inc.

The band hit the music scene in 2008 when they joined in the garage of Vita house—a campus small group house. KBC, as they are known among students, is made up of a five-piece horn section, multiple guitarists, vocals and auxiliary percussion. Their dynamic sound, strong stage presence and rhythmic variations make them a force to be reckoned with.

Their single, “How to Build a Planet,” has aired on 91.1 The Globe since last semester and the music video has over 62,000 views on YouTube. Other songs on their debut album, Ad Astra Per Aspera include “Zombiefaced,” “Gondor Primulon” and “Young Professional.”

Stationed in Nashville, Tenn., Kansas Bible Company is working their way up in the music world one show at a time.

“We’ve been in Nashville for a month and a half and have gotten a very warm reception,” says Jake Miller (stage name Carl Violet). “The Southern comfort is more than we could ask for.”

According to KBC, the house they live in used to accommodate various drug-users and sellers. After “scrubbing the floors, painting rooms and scraping  mysterious brown residue off the walls,” the band settled into the house, which they christened “Hotel Chicamauga,” a reference to the street they live on. They say their neighbors are more than enthused about their positive influence in the neighborhood.

While in Nashville, KBC practices five to six times a week to improve their songs, stage routines and add new songs to their lineup. They’ve played at venues such as The Constant Spring in Goshen, The Strutt in Kalamazoo, Mich., Drifters and Green Door Gourmet in Nashville; as well as the Bluebird and Audio Scenery in Bloomington, Ind. Upcoming tours include shows in Cincinnati, Ohio, and Indianapolis after their appearance in Goshen.

“We are so excited to come home for a free concert for all ages to showcase our new material as well as some new covers,” Miller said. “The KBC will not stop at any measure to get you on your feet!”

Jason Samuel is the entertainment coordinator for Downtown Goshen, Inc., and his years of experience in the music world make him a popular music connoisseur around town.

“We’re excited to be able to bring KBC back to Goshen to perform a free concert at First Fridays,” Samuel said. “They have a unique sound and a lot of stage presence and an entertainment aspect that you don’t find in a lot of upcoming bands. With their ability to mix brass, percussion and strings: we’re talking about a rocking good time.”