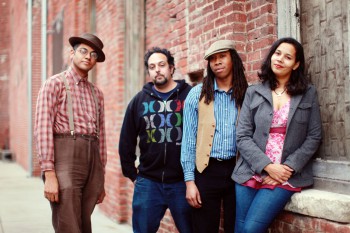 A Grammy-winning string band, the Carolina Chocolate Drops, will be performing at Sauder Concert Hall on Tuesday, October 25 at 7:30 p.m. as a part of the 2011-2012 Performing Arts Series.

The Goshen community is invited to come enjoy the wide variety of instruments, ranging from banjos to bones and even jugs and kazoos, that the Carolina Chocolate Drops offer in their five-person band. The traditional African-American string band gives a modern take on many older Southern folk tunes and themes.

The band began in the summer of 2005 when Dom Flemons, Rhiannon Giddens and Justin Robinson came together every Thursday night for a jam session. The young band is now composed of Flemons on the banjo, Giddens with vocals and fiddle, Robinson on fiddle,  Adam Matta as a beatboxer and Hubby Jenkins as a multi-instrumentalist. Both Giddens and Robinson come from classically trained backgrounds with opera and violin. Flemons has a background in slam poetry and guitar.

Because of the diverse instrumental blend, even the band members themselves find it difficult to pin down their genre. In an interview with bestnewbands.com on the Chocolate Drop’s website, Flemons tried to explain their sound.

“Well it’s really hard to classify what we do,” Flemons said. “When people ask me, I say we play old time fiddle and banjo music. If I talk more, I let them know we play old-time blues, country music, and jazz as well.”

But by blending a collection of genres, the Chocolate Drops have created their own unique sound, one that has attracted much attention in the Americana music scene.

Interested attendees should reserve a seat ahead of time for the performance. Tickets can be purchased by calling or coming to the Goshen College Welcome Center during their open hours of 9:30 a.m. to 11:30 a.m. and 12:30 p.m. to 3:00 p.m.