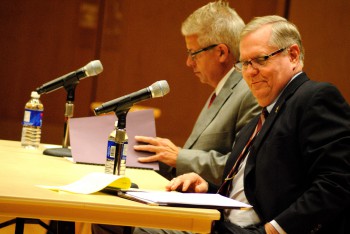 The first, an extended convocation at the College chapel, focused on the candidates’ views on servant leadership. The second was a more formal debate regarding policy held in Sauder Concert Hall as a part of the Yoder Lecture Series.

Both candidates stood at the Church-Chapel podium during Monday’s convocation. The regular crowd of students was joined by a large number of interested community members.

The discussion was led by President James E. Brenneman, who asked a series of questions regarding the core value of “servant leadership.”  Standing on the floor below, facing the candidates, Brenneman invited Riegsecker, Kauffman and audience members to engage in a discussion that would “help share their vision for servant leadership for the common good.”

Kauffman, the mayoral incumbent, gave a brief personal address regarding how he intends to lead with servant-hearted policies.

“Any power I have comes from listening to the people of Goshen,” Kauffman said. “My job is to empower others to make a change.”

Riegsecker explained his view of servant leadership by telling the story of a WWII captain who sacrificed his own safety for his crew and passengers.

“Far too often, leaders decide they know what’s right for the common good,” Riegsecker said. “But a servant leader listens and has humility and unconditional love.”

Though the candidates established their common ground in servant leadership during the convocation, that evening’s debate emphasized their political differences.

Sitting side by side at a single table on stage in Sauder Concert Hall, Riegsecker and Kauffman agreed that the most pressing issue facing Goshen is the local economy. Yet disagreement arose when discussing how to stimulate job growth and enrich the local community standards.

When asked which took top priority, quality of life or economy, the candidates’ opinions polarized.

“We need to get back to work in order to continue our quality of life,” Riegsecker said.

Kauffman disagreed with Riegsecker’s priority of economy over quality of life, stating:“I couldn’t disagree more. Quality of life is the foundation for everything. Jobs will follow people.”

As the hour-and-a-half debate continued, Kauffman and Riegsecker expressed their hope for the future of Goshen. Kauffman’s emphasis remained consistently on enlivening the community’s standards with upkeep of local businesses and the downtown area.

“The downtown is the focal point of a community,” Kauffman said. “Cities are built from the inside.”

Riegsecker stressed the importance of creating a community that will attract businesses and manufacturers which will create large employment opportunities.  But in order to do so, Riegsecker emphasized the need for community involvement.

“We will be a team,” Riegsecker said. “We’re going to work together.”

After exchanging a handshake, the candidates closed their cases by asking for the audience’s vote. The debate came to a close and the audience was asked to continue any further inquiry at a booth set up outside the concert hall.

Any student who is registered to vote in Indiana is invited to share in choosing the community’s next “servant leader” for the next four years at the Nov. 8 municipal election.