Jamaica S.S.T. to be discontinued 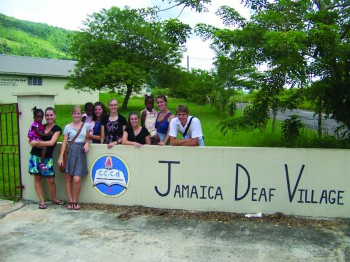 The decision is primarily driven by not enough students showing interest in the program. On the most recent term to Jamaica in the fall of 2010, only nine students participated.

A second factor of the discontinuation is the perception that Jamaica S.S.T. was exclusively for American Sign Language (ASL) students. Understandably, the program attracts many ASL students because it allows for interaction with Jamaican deaf culture and hand signing.  Jamaica S.S.T. was originally created for both ASL and non-ASL majors, since S.S.T. as a whole aims to encompass a general education instead of a specific focus.

The lack of interested participants combined with the specificity the program had grown to be associated with has led S.S.T. leaders to discontinue the Jamaica term. This is not a reflection of Jamaica as a country, but rather the circumstances surrounding it.

“I understand the reasons for canceling Jamaica, but I’m sad that others can’t share the great experiences I had,” said Carrie Smucker, a sophomore that was in Jamaica S.S.T. this past fall.

The S.S.T. office hopes to find a replacement for Jamaica before the next group travels in the fall of 2012. No official candidates have been released, but the possibilities will be analyzed for their accessibility to service locations. Ideally, the option will still incorporate deaf culture and sign language.