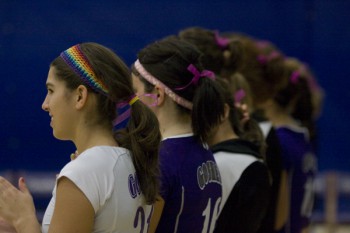 Goshen had already played Taylor at home, who was ranked #10 at the time.  A thrilling game lasting five sets, the Leafs “played so well … it was the best we had played up to that point,” said Hannah Grieser a sophomore outside hitter.

It was a different story at now 9th ranked Taylor, during their homecoming weekend.

Goshen played well in the first game, hitting .293.  “We gave them a match and stuck with them,” said Grieser.  Taylor was able to make their plays when it counted, and won the first set 25-22.

After that game, the Trojans went on to sweep the contest winning the next two matches 25-15 and 25-19, limiting Goshen to .130 and .095 hitting.  Of particular note were senior Peni Acayo, with a match-high 21 kills, and freshman Morgan Broderick with a match-high 23 digs.

The next day, Goshen traveled to Winona Lake where they took on Grace College.  Just the previous Tuesday, Goshen had beaten Grace in four sets.  According to freshman Emily Waits that game was “one of the most fun of the season,” as things really came together for them.

However, this time around it was a five-set defeat for Goshen.  “It’s frustrating,” said Waits  “It was close last time, and it was close this time.”

But the tides turned for the next two, as Grace began to take the upper hand.  The Lancers won 25-18 and 29-27, pushing the game into a fifth set.

Again of note were Acayo and Broderick, with 27 kills and 26 digs respectively.

“We’re better home than away,” says Waits referring to the weekend.  “[We] can’t seem to bring the same mentality on the road.”

That could be a good thing, as they finish conference play with two games at home, and the MCC tournament still ahead.  Be sure to catch them in action on the 20th against Spring Arbor University (10-9) and the 22nd against Bethel College (14-10).