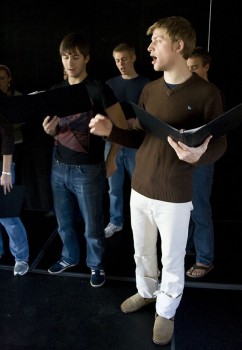 Patrick Ressler, front, has organized a group of students, collectively known as The Dynamics, to perform an impressive score of original a cappella arrangements at this Friday's coffeehouse. Photo by Emily Miller.

The Campus Activities Counsel has four exciting Hour Afters in store for the campus.

On Friday the 13th at 10:00 p.m., a Pop Choir Coffeehouse will feature a cappella singing from the student group “The Dynamics.” The group will perform selections from artists Justin Timberlake, The Beatles, Imogen Heap, The Wailin’ Jennys and more. Patrick Ressler, a junior, organized the event. The concert is currently sold out, but hopeful students without tickets can still come to the door of Newcomer on Friday and perhaps find an extra seat.

On Sunday the 15th at 8:00 p.m., a musical performance called “Coming Together” will be held in the Umble Center. During the show, 15 students will sing well-known Broadway musical songs. Some of the featured musicals will be “Rent,” “Spring Awakening,” “Wicked” and “Children of Eden.” Tickets are free for those with GEEK cards and $5 for those without them.

On Friday the 20th, Alana Kanagy will present “Alana and the Bathroom Mix Guild,” a one-night Hour After featuring music and theater. The show will be hosted in the Union gym at 10:00 p.m. with a full sound and lighting system. There will be room for dancing, so dance please, do. The gym can hold up to 300 people, so there should be plenty of seating for students.

On December 4th and 5th at 10:00 p.m., Mark Hershberger and his roommates will perform an Hour After in Newcomer. This show is also sold out, but more information about extra seating will be available within the next month.

“The Hour Afters are going to be an all-around fun time,” said CAC organizer Tim Blaum. “They’re the perfect opportunity for students to show off talents that otherwise might go unnoticed on campus.”