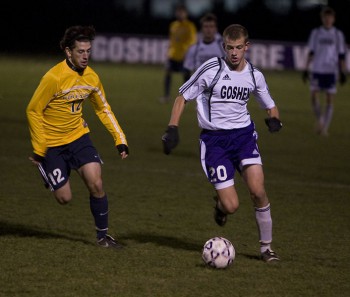 This past weekend, the Goshen faithful came out in large numbers to support the men’s soccer team as it played the first round of the MCC tournament. The last time the two teams played, Goshen came out with a win from a very physical game. This time around was similar as both teams were very physical, but Goshen was able to pull out a 3 to 2 win with goals coming from Greg Thiessen, Juan Diaz De Leon and Daniel Martin.

The first goal came within the first six minutes of the game from a quick give-and-go combination between Thiessen and Nick Good with Thiessen driving a well-placed shot from the top of the box to give Goshen the lead. After that goal, the game became much more physical and intense as both sides moved the ball and tried to create scoring opportunities. The rest of the half ended with no more goals being scored, but both keepers were tested a couple of times.

Second half started the same way the first one ended: very physical. Twenty minutes into the half, Goshen went on the offensive with Thiessen coming up the field and Spring Arbor playing a high-pressure defense. Senior Juan Diaz De Leon was left by himself to break away unguarded from Thiessen’s pass. De Leon was able to beat the keeper and put away the second goal of the night as the crowd went wild and began chanting De Leon’s name.

With the game almost coming to a close, Daniel Martin ran the same route De Leon had run and received a very nicely placed ball from Thiessen to give Goshen a 3 goal lead and end Spring Arbor’s chances of continuing in the MCC playoffs. With five minutes left in the game, Spring Arbor was able to squeeze in a goal that caught everyone off guard. In the closing minutes, the physical and intense game almost broke out into a brawl as a Spring Arbor player dragged Connor Histand out of bounds.

The player wouldn’t let go of Histand as his teammates from the bench rushed over to pull him away from the player. Both benches began swarming around both players, and the tension was high. Tim Demant and Coach Thavisak Mounsithiraj, along with Assistant Coaches Tony Janzen and James Graber, broke up the situation before things could get worse.  As the game wrapped up and both teams shook hands and went their separate ways, Goshen celebrated as their season continues and their playoff dream lives on.