Hovan and Seitz perform in the parlor 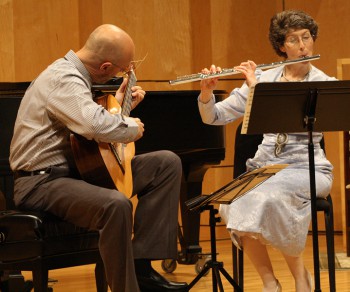 Matthias Stegmann, who teaches guitar at Goshen College, joined Rebecca Hovan on stage during her “In The Parlor” recital, Saturday. Photo by Molly Kraybill.

Dressed in long sparkling evening gowns and lit by the glittering lights of Rieth Recital Hall, music professors Rebecca Hovan and Christine Seitz welcomed their audience, as friends, to their “In the Parlor” themed recital last Saturday evening.

They began their performance with a Mendelssohn piece, “Rondo Capriccioso,” with Hovan playing the flute while Seitz complemented and accompanied her on the piano. Off to the side of the stage was positioned a rocking chair, a desk strewn with books and a fern planted in a gold pot. All of these articles, as well as the slow, graceful movements of the musicians, inspired the atmosphere of an elegant, nineteenth-century parlor.

Intent on the melodies emerging from the parlor before them, the audience made not a sound.

The recital continued with the appearance of several guest musicians. Luis Varga, on the viola, joined Hovan for a graceful viola and flute duet, and Martha Councell-Vargas and Katherine Place accompanied her to form a trio of flutes. Aside from the eye contact and flicker of a smile required to commence playing together, the musicians focused only on the music before them, engrossed in creating the classical harmonies and melodies that filled Reith’s acoustic walls.

In the second half of the recital, Goshen College music professor, Matthias Stegmann, joined Hovan on the guitar. His foot propped up on a small stool so he could hold the guitar upright, Stegmann plucked rather than strummed the guitar strings. The sonata that the musicians played was transcribed for guitar by Stegmann himself and was reminiscent of the Baroque style.

In the program, Hovan explained the parlor theme that pervaded the atmosphere of the evening. “Making music in the parlor in the evenings,” writes Hovan, “was a leisure activity of the middle class during the nineteenth century.” The middle class was in the process of establishing itself and wanted to emulate previously only upper class hobbies. Taking music and art lessons, then, became a status symbol among members of the middle class. “With more and more amateur musicians,” explains Hovan, “came a greater demand for new music that was playable by this level of performer.”

Hovan herself is no amateur, however. She has played the flute for 38 years and has also dabbled in piccolo and other members of the flute family. “I love the expressive capabilities of the flute,” she says, “producing a rich, beautiful tone. I love expressing through my flute what the music is saying to me.”

Seitz, too, has been making music for quite some time. “I begged to play the piano when I was four,” recalls Seitz, “because my older brother took lessons. Finally when I turned five the piano teacher grudgingly accepted me as a student.” Seitz emphasizes that she enjoys accompanying other musicians, but is not fond of playing the piano solo. “I guess what I like about the piano,” says Seitz, “is that I have all the notes available to me, whereas an instrumentalist or singer only gets to play or sing one note at a time.”

Hovan and Seitz have both taught at Goshen College for ten years now. Seitz accompanies for musicians in the region and plays the organ at First United Methodist Church in Mishawaka. Hovan recorded her first CD, A Silver Christmas, in December 2008. Meanwhile, both women continue to grace Goshen College with their classical music.