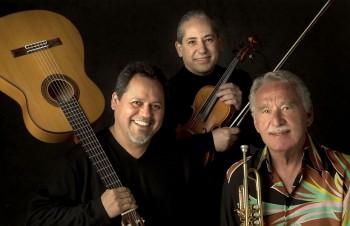 This year’s Performing Arts Series will welcome an array of sounds, ranging from jazzy-Spanish flair, to traditional-Irish reel, to classical-string melody. Over the span of September to February, eight groups of musicians will perform in Sauder Hall, bringing with them talent that has collectively earned more than 30 Grammy® Awards.

The season will debut on September 19 with Doc Severinsen and El Ritmo de la Vida, a group that features Spanish music with a twist of jazz. Severinsen, who grew up in Oregon, is a Grammy award winner and has produced over 30 albums. His energetic trumpeting is best known through his position as the bandleader of Johnny Carson’s “The Tonight Show.”

Severinsen joins with guitarist Gil Gutierrez and violinist Pedro Cartas to form a trio that plays rhythmic,  upbeat Spanish ballads that are “indescribably brilliant.” Severinsen lives in Mexico and joined with Gil and Pedro after they recorded several pieces of music together.

Doc said in his biography from ‘Opus 3 Artists,’ “I came to Mexico with retirement on my mind, but when I heard them play I knew that I would be playing with them for some time to come. Latino music, along with the blues, has always been among my favorites, and Gil and Pedro do it along with a European style that I love and so do our audiences.”

The seven remaining concerts of the Performing Arts Series also hold promising talent and a diversity of music.

On March 30, the African’s Children’s Choir will be performing. The group consists of children ages 7 to 12 from several African nations, and it serves as an opportunity for underprivileged and impoverished children to learn music and travel the world. The choir has performed on American Idol and sung on the soundtracks of Hotel Rwanda and Blood Diamond.

On January 24, Peter Schickele–a composer, musician, satirist, and author–will be performing. Schickele has invented several unusual instruments, including the “dill piccolo,” the “left-handed sewer flute,” and the “tromboon.” Using comical parodies and writing under the name of Bach, he has earned four Grammy Awards for Best Comedy Performance/Album.

The Performing Arts Series occurs every year when internationally known performers are welcomed to the campus. In the past, groups such as Ladysmith Black Mambazo, Toledo Symphony, and Tokyo String Quartet have performed in the Sauder Concert hall. The series has evolved since 1950 when performers and speakers were invited because of the newly-built Union Auditorium building.

For ticket information about the Performing Arts Series, contact the Goshen College Welcome Center at (574) 535-7566. The Welcome Center is open 9 a.m.-3 p.m. Monday through Friday.