On The Globe: Pete Yorn & Scarlett Johansson “Break Up” 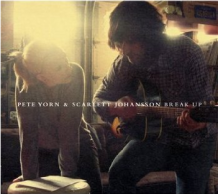 A “Break Up” is what happens when a truly under-rated musician and a world-renowned actress get together to make music. Although this break up is a fictional story between Pete Yorn and Scarlett Johansson, it makes for a great 11-track album.Three years after the making of the album in Yorn’s garage, the duo decided it was time to share their love story. The idea of the album came to Yorn in a dream in the aftermath of—that’s right—a break up.

“I sat up in bed, and the whole thing was in my head, fully formed,” says Yorn. The album was inspired by the Brigitte Bardot and Serge Gainsbourg collaborations of the 1960s. With Scarlett Johansson as Yorn’s Brigitte Bardot, each sings his and her side of the break up story.

The album includes eight original compositions by Yorn and one by the late Chris Bell, co-founder of the band Big Star. By the end of the 29-minute long album the listener doesn’t want the pair to break up, but finds it inevitable. The single, “Relator” made its way to 91.1-FM The Globe May 12th and has been in a heavy rotation ever since. It’s a heart-breakingly fun album to be released Tuesday September 15th on Atco Records.