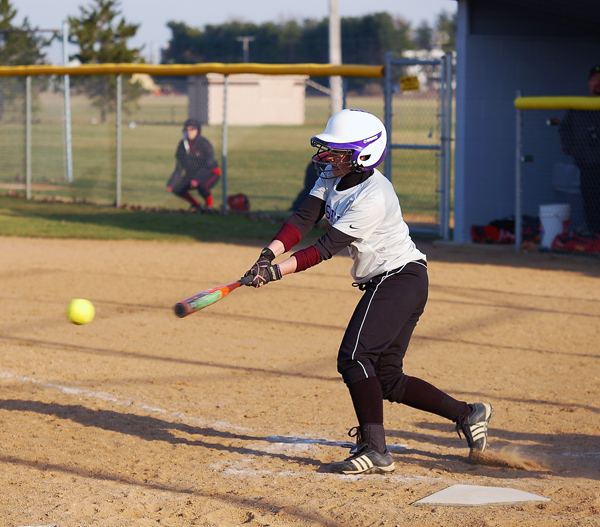 Despite three injuries sustained last weekend in the Lindsey Wilson Sports Tournament, Maple Leaf softball was back in swing just two days after returning from Kentucky.

This time, hosting a doubleheader against Grace College, it was pitcher Jessica Reed commanding the mound in game one. Starting pitcher Haly Williamson sat out due to a line drive that broke her pitching hand on Saturday against St. Catherine’s College.

“I had no idea how Jessica Reed was going to pitch,” said Maple Leafs Coach Lee Mast, “but she stepped up to the challenge and did an excellent job.”

The Maple Leafs kept the Lancers locked into a 0-0 tie until the top of the fourth inning. With bases loaded, the Lancers scored on an error as Rachel Braddock, took a pitch to the head. In an attempt to halt the Lancers in their tracks, the Leafs went for a double play. But the play was not quick enough as the Lancers scored. Grace pulled in two more runs and led 4-0 before the Leafs managed to get three outs and stepped up to bat.

Jessica Carney, a junior, smahed her first career home run in the bottom of the fourth inning, cutting the deficit in half with a score of 4-2. Grace answered back in the top of the sixth bringing in another run, but could not break Goshen’s confidence as third baseman Amy Clem crushed the Leaf’s second homerun of the day. Nipping at the Lancers’ heels, the Maple Leafs brought in one more run before ending the sixth inning with a 5-5 tie game.

Eager for their first conference win, the Leafs made quick work as Reed caught a line drive for the third out. The Leafs failed to break the 5-5 tie for the win taking game one into extra innings.

“The hit to left field is what killed us,” said Coach Mast. “The ball went under the outfielder’s glove, and Grace scored.”

Grace jumped started game two leading 2-0 by the end of the first inning. The Lancers continued to advance with two RBIs and a two person homerun for a 6-0 lead on the Leafs.

With the Lancers leading by seven runs at the bottom of the fourth inning, the Leafs began to warm up with three back-to-back homeruns.The Maple Leafs  managed to pull in three more runs, including two additional homeruns for a tie score of 8-8 before the game was called in the ninth inning.

“After going through everything they [had],” said Coach Mast, “this [doubleheader] was unbelievable. My hat is off to these kids.”