‘Songs from many cultures’ soar in Sauder 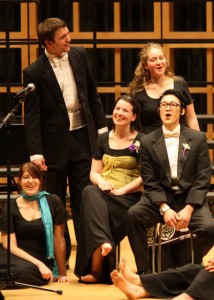 Saechan Lee (Right) and a group of others perform a folk song at the annual Earthtones concert. Photo by Tim Blaum.

The Goshen College choirs brought together a wide variety of sounds in their concert “Earthtones: Songs from many cultures” on Saturday.

It was the final concert of the year for the Goshen College Chorale, Women’s World Music Choir, Chamber Choir and Men’s Chorus and for 21 seniors, who were each given an egg shaker, a traditional senior gift, as a thank you for their involvement.

The choirs performed songs from all around the world, including selections from Brazil, Thailand, Mexico, Cuba, Wales, Haiti, Austria, Israel and Palestine.

A number of students were involved in more ways than just singing. Nathan Swartzendruber, a senior, conducted the Men’s Chorus in “What wondrous love is this” arranged by Patrick Ressler, a sophpomore. Chamber Choir performed “Konkolo Piano,” a song written by Jesse Landis-Eigsti, a senior.