Two sides of a bearded coin

A professor of Bible and religion, fluent in upwards of 15 languages and with a Ph.D. from Harvard University, Paul Keim knows just about everything.

A pudgy, balding man in his 60s with a beard few can claim outside of the Amish tradition, Keim looks the part of a biblical scholar, but at first glance, “basketball star” doesn’t seem like a fitting tagline. However, a heavy influence from sports beginning as a child sparked lifelong relationships and intercultural experiences.

Volleyball, football, tennis, softball, basketball—you name it, Keim played it as a kid. He also pushed himself academically as a self-prescribed “bookworm.” Basketball grew to be Keim’s passion in high school, sparking a deep-rooted adoration for the game.

Nights spent in the green and white uniform of Concord High School were even more special when playing inside North Side Gym, an arena that sits more people (7,373) than residents in Dunlap (6,235). “That place would be packed, everybody going nuts,” Keim said. “It was a great feeling.”

During Keim’s senior year, he and his teammates reached sectional finals. One opponent that stood in the way of Keim, from rival Goshen High School, turned into a familiar face later in life.

Joe Liechty, current professor of peace, justice, and conflict studies at Goshen College,  remembers many of the battles he had against Keim on the basketball court, but none clearer than their second matchup of the 1973 season. Both were seniors and leaders on their team. Liechty, a track star, lockdown defender, and Keim, a cold-blooded shooter and facilitator.

Liechty insists to this day that Keim was the superior player.

“I think he averaged a little over 20 points a game,” Liechty said, “It would have been much higher if the 3-point shot had existed then.”

Keim’s team spent the first half of the season dominating opponents, including Goshen, while Goshen went an abysmal 0-10 to start off the year. An easily forgettable season for Liechty soon turned into one to remember. As he remembers it, in their second matchup with Concord, Liechty locked down offensive powerhouse Keim to just 12 points on 3-16 shooting.

“By the second half, I had reduced him to crossing half court, whimpering like a baby, and heaving a shot in the general direction of the basket,” Liechty said.

However fierce the rivalry between the two competitors was in the 1970s, Liechty and Keim evolved their relationship into that of a meaningful friendship and professional partnership. “I count [Paul] as my best friend,” Liechty said, “we’ve worked closely on vengeance and forgiveness themes over a decade and more.”

Both credit the foundation of their relationship to be basketball.

In addition to the relationships he formed in his high school basketball days, Keim’s studious nature also prompted exploration in overseas programs to foster his growing interest in foreign languages.

Having a mother with an Amish background and being surrounded by people speaking Pennsylvania Dutch, Keim was influenced by bilingual people growing up, leading to his curiosity later in life. “I was mesmerized by the fact that these very simple people were bilingual,” Keim said. “I wanted to study [foreign languages] as well.”

In between his junior and senior years of high school, through an Indiana University scholarship, he went on a summer-long trip to Germany. After taking the language for four years prior, Keim came back fluent.

As college began to be at the forefront of Keim’s mind, there were only two boxes prospective institutions needed to check: basketball and foreign language class offerings.

Despite exiting high school as a top player in the state of Indiana, a lack of exposure at a small school left Keim at a standstill for basketball options. “I think about sometimes what would have happened if my coach had been sending tapes out,” Keim said.

Regardless, Keim managed to receive interest from multiple schools, including a prestigious junior college in Hutchinson, Kansas. Gene Keady, the legendary hall of fame coach, was the head coach at the time.

However, the second of his two crucial criteria remained unmarked. The small school in central Kansas wasn’t the right fit.

Keim continued to search for the school for him. In the end, the answer was six miles away: Goshen College. The study abroad opportunities attracted him from the start, and guaranteed a spot on the varsity basketball team, it was a no-brainer.

His experience in Germany as a high school junior nudged Keim to study Spanish and French at Goshen. Once he heard that a professor had just arrived in the Bible department that knew Latin, he could hardly contain himself.

Hebrew and Greek were next on the list. Languages became a drug for Keim.

Keim played basketball for the Maple Leafs for three seasons, missing his fourth to study abroad on Goshen’s Study-Service Term in Haiti.

After graduating from Goshen, Keim attended biblical seminary with the Mennonite Church. He earned a Master of Divinity degree in the Hebrew Bible. Keim then considered pursuing Eastern European studies following an extensive study-abroad trip with Mennonite Central Committee (MCC) to Poland.

Although Polish was one of the toughest languages he had learned, Keim commemorates the value of intercultural experiences when it comes to learning new languages. “The only pronounciation you know is the correct one,” Keim said.

After seeing them play, Keim immediately told himself, “I could have played in this league.”

He took action and joined a group made up of former Harvard players and other Ivy Leaguers and instantly cliqued with the team. Every Saturday morning they played at the Harvard Law School Gym. They dominated the intramural scene, won local leagues and competed in the Boston City League.

The crafty shooting guard from Dunlap was making his mark on Ivy League grounds.

One afternoon, some of the guys on the team were reminiscing on a trip they took to play basketball against teams in Ireland and commented on how they wished they could go back to Europe to play. After some further conversation, Keim initiated a plan for the squad to compete in Poland, the same location from his time with MCC.

Keim competed against professional teams, trained with the Poland Junior National Team and ran training camps for some players, all while translating Polish to his entire crew.

Five years after graduating Harvard, Keim returned to Goshen, where he remains. Keim continues to get his fix of basketball by playing with community members in a biweekly, half-court game at noon.

As for the yin to his yang, Keim is able to utilize his foreign language knowledge in research and everyday life. He continues to speak German with some people on Goshen’s campus, including his son.

A baller and a scholar, Keim exemplifies what it means to be one of the most interesting faculty members on Goshen College’s campus. 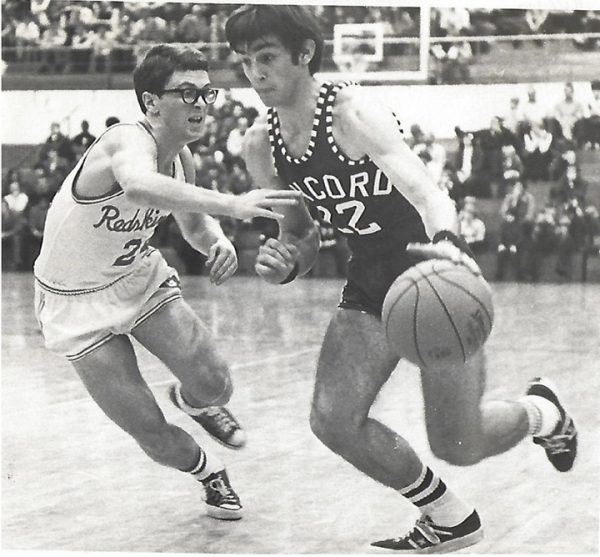