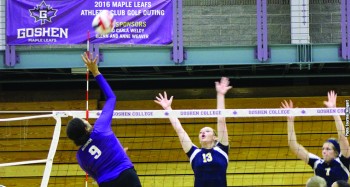 Three strong ace serves by Jennifer Ritchie of the Maple Leafs shut the Ravens down, and the Maple Leafs did not look back taking the first set easily by a score of 25-8.

Goshen had 41 winners compared to just eight errors for a total hitting percentage of .458 which is more than 20 points higher than their previous record set in 2009 against Marygrove University.

Leading the way for the Maple Leafs was first year Natalie Omtvdt who lead the team with eight kills. Meghan Gerke, a senior, and Darienne Maust, a sophomore, both finished with seven kills apiece. Gerke led all players with an .875 efficiency at the net.