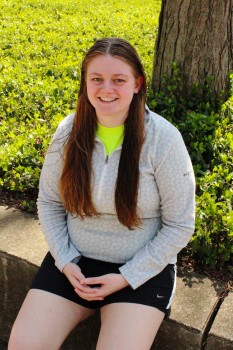 Last week was challenging for me.

If you’re a regular reader of the Record, you might have seen my byline on the top of the front page, under the headline, “Remembering Michael J. Sharp.” It was an article remembering the life of Michael, more commonly known as M.J.

That was one of the hardest articles I’ve ever written. I didn’t know M.J. personally, but I do know his father, John Sharp. He was one of my history and Bible professors at Hesston College.

One of the classes I took with John was Peacemaking and Justice. While M.J. was in Kansas for a short time, he came and spoke to our class about the work he had been doing with MCC in the Democratic Republic of the Congo.

When I heard the original news that M.J. had been kidnapped, I was crushed for John and his family. I couldn’t believe it. Then a little over two weeks later M.J.’s body was found, and my heart hurt.

It’s hard to explain since I didn’t know M.J. personally, but the combination of my sadness for John, a professor I respected so much and enjoyed having classes with, and the loss of a person doing such important work made me feel terrible.

Throughout this whole journey, John has been very open, sharing information on social media, but in a few different posts he wrote that he just didn’t have words.

That to me was one of the hardest things to read because John is a storyteller and always seems to have the right thing to say. For him to admit that he didn’t have words, while completely understandable, was extremely telling.

With time, John and his wife, Michele Miller Sharp, found words as they were being quoted in a number of news articles in national publications.

Then, I got the assignments for the next issue of The Record. There at the top was an article about M.J.’s life. I sat for a while trying to decide if I should to write it or not. I didn’t want to write it because it made me sad, but it felt weird to just assign it out.

I decided to write it.

I had no plans of contacting John. Why would I contact a grieving father for an article in my college newspaper (a college M.J. hadn’t even attended)? So I contacted other Goshen College people with connections to M.J., like Suzanne Ehst and Jason Samuel.

But a few days before my article was due, I just couldn’t shake the feeling that maybe I should give John the chance to comment on the article. He had been so open in sharing M.J.’s story with others, and I’d rather have him decline to comment than have him see the story and wish I’d contacted him.

So I sent him a message. He responded almost instantly. He said he’d be glad to talk with me.

I called him on the phone the next day, and that 15-minute interview was one of the hardest interviews I’ve ever done because I could hear the sadness in his voice, but I could also hear the admiration he had for his son and the work he had been doing.

While that article was difficult for me to write, it was also one of the most rewarding. It was an incredible honor to be able to write about M.J.’s life and work.

But this wasn’t the first time I’d written about someone’s death.

Earlier this year, I wrote the Record article about Hannah (Grieser) Hochstetler’s death in a car accident. That too was hard to write, yet an incredible honor. I actually got an email from Hannah’s father, thanking me for writing it, and that’s when I knew how much this type of writing can mean to someone.

On the day I was writing the  M.J. article, I was listening to NPR in my car, and it just so happened that when I got into the car, on air was an interview with Vanessa Gould, director of the documentary “Obit,” which follows writers of the New York Times obituary department.

Her film takes a closer look at how these journalists are tasked with accurately and respectfully reflecting on the lives of people they’ve never met. Their job is to talk to grieving family members about the people who have died.

And listening to that, it just put my mind at ease. It all made sense why my work on these articles about the death of someone was simultaneously so hard yet so rewarding.

At first it sounds a little morbid honestly. Who would want to make a career out of writing about death?

But the reality is that I don’t think anyone wants to write about death, but we also want our loved ones to be memorialized, and an obituary is one way to do it. We want their lives to be reflected in the words that will continue on much past them.

So while it may seem intrusive to think about a journalist contacting a grieving family for a story, remember that that’s not the whole story.

Of course journalists have to be respectful in the way they go about it, but don’t write them off as being nosey or insensitive. Those articles about M.J. and Hannah were the most respectful pieces of writing I think I’ve ever done because I wanted to handle them with such care, out of respect for the lives they’d led.

This type of journalism offers just a small bit of healing to those in pain. It tells them that this person they loved so much was valuable and worth being recognized. And that makes any challenging week well worth it.