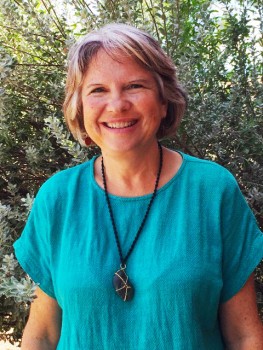 Schlabach is there by choice, and she can leave whenever she wants. She chooses to return as part of a group of visitors time and time again to be watched by a guard in a gray visitation room while she talks, laughs and sometimes cries with women being held in the immigration detention center.

Eloy Detention Center is a for-profit prison-like facility that houses around 1,400 immigrants from various countries. Schlabach is part of a community visitation program run through Casa Mariposa, an organization in the Tucson area working to provide support and restoration for immigrants and their families.

This organization coordinates groups, in Schlabach’s case a group of about 15 people, to regularly visit detention centers. It is also supported by Shalom Mennonite Fellowship, where Schlabach co-pastors part-time.

Schlabach had no immediate employment plans when she moved back to Tucson from Goshen in the summer of 2012 with her husband, Jay, and youngest son, Thomas. Having been a part of the pastoral team at Waterford Mennonite Church in Goshen for nine years, Schlabach decided to take a break from pastoring and pursue other ways to get involved in their newfound community.

“I was especially interested in interfaith groups, or groups that held some kind of spirituality element to their work,” she said. This is when she became connected with Casa Mariposa. Schlabach describes it as “a welcoming, evolving community with a spiritual awareness.” They have a large house where they offer hospitality to migrants or others needing temporary housing.

“It was important to me to work part-time at pastoring so that I could keep my commitments in the wider community,” she said.

The intersection of spirituality and social justice work is important to Schlabach.

“We as Mennonite Christians are committed to love our neighbors according to Jesus’ stories about what this means—loving across boundaries, loving the stranger, loving the vulnerable, loving those who are in need and taking risks to do so.”

She also believes that as someone who has benefited from white privilege her whole life, she must listen to the stories of her sisters and brothers who have suffered because of the same systems that she benefited from.

“I need to learn from their wisdom, their experiences, their way of doing the work that I’d like to learn to do, as we come together in community,” she said.

Schlabach is quick to point out the injustices rooted deep in our immigration system, like how Congress recently passed a law which mandates that these “beds” in immigration detention must be paid for daily with taxpayer dollars.

“We need to educate ourselves about immigration detention,” she said. “We need to provide, as communities, humane ways of supporting immigrants who are in immigration proceedings so that they do not need to be separated from their families and isolated behind bars, treated as criminals.”

Schlabach has many powerful stories that have come from relationships built with those currently housed in Eloy Detention Center. Most are fearing deportation and fighting to stay in the country, and most have children or other family members in the United States.

Recent political events in the United States have had direct impact not only on immigrants across the country, but on Schlabach’s community in Arizona as well. Schlabach talks about how visitation at Eloy Detention Center has become increasingly difficult since the Trump administration took office, as more restrictions are being put in place.

“There is more anxiety in our community,” she says, “with more random apprehensions and deportations, even of some DACA holders.” She also mentions the rising sanctuary movement, as communities and churches pledge to stand with those who are vulnerable because of new policies being enacted from the Trump administration.

But, despite an increasing sense of fear and uncertainty for many immigrant communities and their neighbors, Schlabach says that the work is worth it.

“The relationships and friendships have enriched my life and my faith so very much,” she says. She talks about those who, upon release from detention centers, continue to return and visit others still inside. “Of course they are a huge encouragement to those they visit, because they have lived the experience,” she says.

Schlabach wraps up a recent blog post by saying, “When we visit, when we write letters back and forth, when we take time to listen to the stories of these women—even when it is hard to hear them—love finds its way through the walls and barbed wire of immigration prison.”

And so Schlabach, too, finds her way past the walls and barbed wire of immigration prison, living out her call to ministry in a direct way, the embodiment of faith-in-action, the very act of visitation a resistance of love.