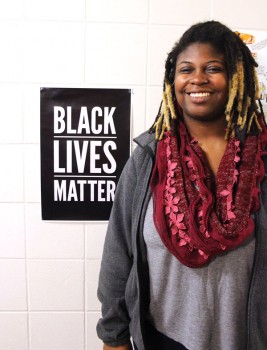 In Martin Luther King Jr.’s “Letter From a Birmingham Jail,” he voices his frustration with the white moderate. Now, more than fifty years later, I must do the same.

I recognize and commend those who are aware of racial inequity and the problems on this campus, but this truly is not enough; the white moderate in 1963 was aware of the oppression and racism in Birmingham, but their inaction spoke volumes. At the MLK convocation, we were encouraged to keep the conversation going, but I’m tired of talking about it.

At Goshen, we simply discuss; I live it every single day. Here I have discovered an entirely new brand of ignorance. One where a group of black students together are just collectively referred to as the Black Student Union. One where in almost every class I have to give “the black opinion.” One where white students are constantly asking me what they can do to help as if I have all the answers to fix racism. And while I appreciate your concern, I must ask you to look to those who dedicated their lives to this cause; in his letter, King believed that racism would be eradicated through “strong, persistent, and determined action.” Action, not conversation.

Goshen College is entirely too comfortable with the idea of simply talking about injustice. If you leave a long conversation about race feeling good and accomplished, you are part of the problem. If you hear a story, hear our pain and do nothing with it, then you are a part of the problem.

When students interrupt an MLK convocation, your angry emails to them do nothing. It means you sit from your place of white privilege and comment on things you don’t even understand. I don’t want emails; I want you out there fighting for me. I don’t want you to just tell me that you’re there for me. I want to be standing gloriously in the middle of a protest and when I look to the side you’re physically standing next to me.

And words won’t be necessary because in that moment I’ll know that my life matters to you. Because one interruption would not matter so much if Goshen was doing more to support and promote black lives, black justice and black education.

Despite this, Goshen is a place where I’m allowed to voice my opinion, where students of color are valued, and where I don’t worry about physical retaliation. Goshen College has by far been the most accepting place I have ever lived. Unfortunately, this isn’t saying much.

I still hear the word n***** at parties and I am still used to ignorant remarks about my hair; the college doesn’t get a gold star for treating me like a human being. For a long time, black people had to fight to be seen as people. Leaders like MLK had to resist the status quo that kept them as second class citizens.

It is time for all of us to realize that allowing black and white children to play together or having anti-discrimination policies are the bare minimum of what we can do. Dr. Martin Luther King Jr. had a dream for the future, but I am sad to say that his work has not been completed.

We cannot forget that for some, education does not mean equality. Despite my degree, when I leave this campus in four years I will not be equal to white men or white women. How is Goshen preparing me for a world in which my education and skills mean very little? How will Goshen ensure my success without addressing these issues?

As I begin my college education, these are the thoughts that occupy my mind. I can only hope that Goshen College will break free from the stereotypical behavior of the white moderate and take these issues as seriously as I have to.