Students spend a summer serving as part of the Inquiry Program

This summer, 15 Goshen College students had the opportunity to explore vocational interests of theirs while simultaneously developing their own faith experiences through Goshen’s Inquiry Programs. The Inquiry Program consists of 3 subsections: camping, ministry and service. Each one invites students who have been accepted into the program to spend three months at a camp, congregation, service agency or any another related agreed upon placement.

All host sites are church related placements and offer plenty of new connections to organizations. Host sites and students alike have noted the strength of the bonds created over these three months of community building, whether it be between staff, patients or campers.

Joelle Friesen, a fourth year biochemistry student, took part in the Service Inquiry program at the Immanuel Health Center in Bloomington-Normal, Ill. Friesen spent her time at the agency doing a variety of tasks that helped the employees keep it running smoothly. 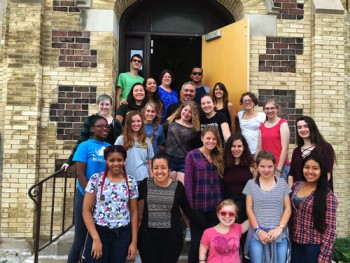 “Immanuel taught me that there are many ways of contributing to a person’s well-being and that developing positive relationships with individuals is vital for successful care,” she said.

She went on to say that this helped flesh out her hopes of becoming a primary care physician, so she can effectively unite her passions for both science and people.

Alma Rosa Carillo Flores also had a service placement, hers being in Chicago. It focused on the gentrification of large cities and how that affects those who reside in them. She worked with DOOR Chicago, bringing church groups from around the country to do service and tackle issues such as these.

Carillo Flores engaged people in difficult conversations, often pertaining to racism, oppression and marginalization. Carillo Flores claimed this was the hardest part of her time in Chicago, but it was also a very rewarding experience.

“Getting to know leaders from the city from all ages made a difference and was very encouraging,” she said.

Tanner Engle, Roxy Gehring and Abbie Kaser all took part in the Camping Inquiry Program this summer, albeit at different camps. Engle spent his time at Camp Friedenswald in southern Michigan, Gehring at Camp Mennoscah in south central Kansas and Kaser at Menno Haven Camp in Tiskilwa, Ill.

All remarked on the opportunity to develop close connections with their campers and fellow co-workers. They also relished in the fact that they could spend their summer in the outdoors, as it may be difficult to experience the natural world in other ministry settings. A highlight of the summer that Kaser noted was Wednesday nights when each of the cabins would make a meal over the campfire and spend the night outside under the stars.

Monica Miller was one of several who took part in the Ministry Inquiry Program, doing her placement at Kern Road Mennonite Church in South Bend. Miller explored the academic side of pastoring for a congregation, while also getting involved in a variety of service projects. Miller worked alongside several pastors to develop her skills in preaching, one woman and one man, which she appreciated. She said, “I so enjoyed the opportunity to get to know them and hear their experiences as a female in a historically male-dominated vocation, especially as a young adult just breaking into the field and navigating the realities of pastoring today.”

For those interested in Inquiry Programs, visit the Campus Ministries page on the Goshen College website to learn more.