Recently Goshen College was ranked third nationally by Washington Monthly in the category of National Universities-Bachelor’s. This ranking makes GC the top baccalaureate college in Indiana.

A baccalaureate college is defined by The Carnegie Classification of Institutions of Higher Education as an institution where “bachelor’s degrees account for at least 10 percent of all undergraduate degrees and [the institution] awarded fewer than 50 master’s degrees.”

GC was ranked higher than institutions like Taylor University, Huntington University, and Manchester University. The college was also listed as one of the top 100 “Best Bang for the Buck” colleges in the Midwest, receiving high marks for graduation rate, graduate performance, and repayment rank.

GC was listed second for students who go on to earn a Ph.D and for students who participate in the Peace Corps, as well as sixth for its graduation rate. GC also excelled in areas like graduate performance and loan repayment rates.

Ross Peterson-Veach, the interim vice president for academic affairs, was not surprised by this ranking, because the federal government requires all colleges and universities to report on many different aspects of how an institution is run. One of those aspects is educational quality.

“Unlike other rankings that use survey data, Washington Monthly creates its rankings using government-reported ‘outcomes data’ like graduation rates and salaries of graduates after 10 years,” said Peterson-Veach. Using a ranking system like that will rank GC much higher than rankings that use ‘input data’ like number of faculty and percentage of applicants that are accepted to GC.

The Washington Monthly’s website expressed that they rate schools “based on what they are doing for the country.” While U.S News & World Report relies on “crude and easily manipulated measures of wealth, exclusivity, and prestige” to rank schools, Washington Monthly has three categories they rate schools on. These categories are social mobility, research and service.

“I hope [the ranking] will have a positive impact on us,” said Peterson-Veach, regarding the future and how the Washington Monthly ranking will influence the college. “In our institution’s work to tell our story, we will be working on ways we can tell that story so that we include this kind of information.”

Peterson-Veach also said, “How we feel about GC and how prospective students feel influences a lot of what we think about our choices to come here and stay here.” Peterson-Veach also added that while it is important to understand facts about how GC compares to other institutions, “rankings are interpretations, but facts are the facts. GC is clearly a great place to get an education and to make a life.” 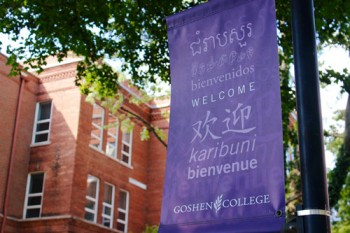