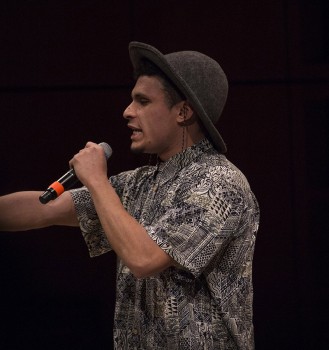 Born in Chicago 20 years ago, Abraham “Abe” Medellin, a first-year, is known around campus for greeting everyone he sees and performing during Open Mic nights and Kick Off.

Medellin is an interdisciplinary major with concentrations in music, broadcasting and marketing. He came to Goshen College because of the communications department and the business department, but has started to swing into media production and music.

Medellin’s parents met in Chicago during a missions’ trip. His mom is from Sao Paulo, Brazil, and his dad from Aguas Calientes, Mexico. Though he grew up speaking English in the classroom, at home he spoke a mixture of Portuguese and Spanish, which helped him learn different languages while growing up.

“Sometimes I still don’t know what language we speak at home,” he said. In some situations, Medellin and his sister, Ally, have to translate for their mom.

Medellin was only a few months old when they left Chicago behind and headed to small-town Goshen, where his parents thought the environment would be healthier for their young kids. Medellin’s dad also has family in the area who helped them move in.

Since then, Abe and his sister have stayed local, attending Goshen Middle School and then Goshen High School. After finishing their studies, both of them decided to come to Goshen College.

Although he has lived his whole life at Goshen, Medellin is having a completely different experience as a college student, saying that “it’s a whole different world.” He does not visit his family as much as he thought he would at the beginning, because school keeps him busy every day.

Medellin appreciates living in the dorms. “I can always go to someone’s dorms to talk about life or just about random stuff and that helps me to relax,” he said.

The only disadvantage for him this semester is not having a roommate. “Sometimes I feel like I spend way too much time by myself,” he said. But he also added, “I use that time to learn new things, so it is never a waste.”

Medellin also enjoys music, which is a passion that started in middle school. “Give me an instrument and I’ll figure out how to make noise with it,” he said. Medellin knows how to play guitar, bass, percussion instruments, trombone and piano. All but the trombone were self-taught.

His self-teaching methods also applied to his singing. “I like to think that I know how to sing, but it has been all about a learning process,” he said. His last performances have been at Kick Off and Open Mic, but he also sang twice at Goshen High School’s talent show and performed percussion in big stadiums. Although, according to him, they “weren’t that crowded.”

Some of his favorite genres now include indie, rock and hip hop, especially the Pixies and Modest Mouse. “Music has to have something catchy I can take away, or it bombs,” he said.

He also performs music, mostly along the lines of rap and hip hop, and he’s interested in learning “chillax” music.

“I do not want to be cheesy while I sing, and I do not like to use profanity, so that’s where the challenge comes in.” But Medellin is always ready to accept challenges, and he works to bring people’s spirits up with his music.

“I tend to write [music] about struggles we all go through and my own life reflections, and staying positive when things aren’t,” Medellin said. He also only writes music that is meaningful to him, not music to please the crowd, which is why he said he likes artists who inspire and motivate him to stay authentic.

“The process of writing music is grueling,” he said.  While he only wants to spend one to two hours working on the music, “I end up [spending] five hours trying to get my lines right and the way I want [them] to sound,” said Medellin. After recording the lines, he spends two more hours mixing it and sending the song to friends to get feedback. He currently has his own Sound Cloud channel.

Medellin also runs track and field at GC, and his first competitive race was this past weekend.  “I love the team; they’re great,” he said. “They are helping me grow.”

He started running in sixth grade, when he needed something to do when football season was over. He wanted a way to improve himself so he wouldn’t slack off, and it “turned into a new love.”

Medellin likes running because “you’re a product of yourself. You have to go all out and see where you’re at, and what to improve.”

As for the next few years here at Goshen, Medellin has a few goals. First, he wants to improve in track. “That’s my main goal—take my times from high school and just drop them down, be at a higher level,” said Medellin. “Music-wise, in the next three years [I want to] be taken seriously a bit more. I know that’s not something I can say, that’s something that I have to show. And definitely graduate.”