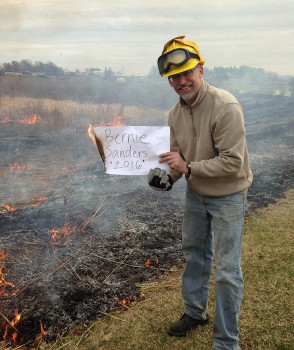 Ryan Sensenig burns the prairie in support of Bernie Sanders on Saturday.
Photo by Laura Miller

Political debates are heating up on campus; literally, as yik-yakers proudly light one up on a nightly basis in the name of socialism! That is true commitment to the cause, I think we can all agree.

However, Ryan Sensenig, associate biology professor, is lighting up a different kind of weed, namely the prairie grass. Rumors are spreading like wild fire that the prairie burnings that happened last Saturday were a political endorsement for the Democratic candidate.

When questioned if he was burning the prairies for Bernie, Sensenig said that he would “not deny such rumors” and that he, in fact, had invited Bernie to the prairie burning last weekend.

What with the full-body hazmat suits and masks, it was unclear whether it was Bernie Sanders or Naomi Peters who was handling the flame thrower during the event. Sensenig explained the science behind his political choice: “Prairie fires create a disturbance which allows for new growth, which is just what Bernie is doing with his campaign.”

Sensenig is far from the only person on campus making political endorsements. We can all imagine music professor Scott Hochstetler bragging about his “YUGE” vocal range. And senior Halle Steingass is insisting that everyone call her Hall(ary) until the end of the year. Another senior, Ben Shelly, explains that he hasn’t missed a political debate yet because they provide the most top-notch material for fun games. “Four words: Take this country back.” Shelly explained. “USA! USA! USA!” he chanted, until I walked away.

When I went around surveying the student body, however, it became obvious who the majority of Goshen students wanted as their next president: a true anti-establishment candidate who has had waaaaay more success than Drumpf. A candidate much sprier than Bernie. A candidate who doesn’t even have an email address, unlike Clinton. And one that isn’t even potentially the Zodiac Killer, like Cruz.

That’s right. If you’re a true supporter, then you will write in the Goshen College Women’s Basketball team for President in the upcoming primary. Alright, I’m just going to say it. I’m Lit for the Leafs, and you should be too!