For the love of the game: fighting through major sports injuries 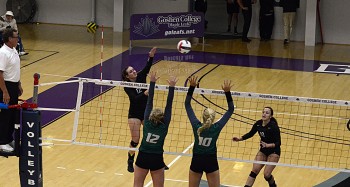 According to ESPN, there are between 250,000 and 300,000 ACL injuries per year. Katy Anspach, a senior volleyball player and sports management major at Goshen College, contributed to that statistic not once, but twice.

While on the volleyball preseason trip to Ann Arbor, Michigan, in the summer of 2013, Anspach experienced her first injury.  “I remember it like it was yesterday,” said Anspach, who was a sophomore at the time.

“It was the second set of the first game that we were playing,” she said.  Anspach jumped to hit a ball from the left side of the net.  When she landed her knee buckled, moving left then right, before she fell to the ground.

“I just came down on my right leg and it just came out from under me,” said Anspach.  “The bottom half of my leg was like sticking out to the side.  I instantly knew it was something serious.”

“I knew it was bad, but I didn’t think it was bad enough that I actually tore my ACL,” said Anspach.  I had never had any knee problems before that, so it was almost shocking that it was that bad.”

Things were even worse than Anspach predicted.  Not only did she tear her ACL; she tore her MCL and three places in her meniscus.

Anspach’s second injury happened about a year later, in September 2014, during her junior year at Goshen.  After having made a full recovery from the first surgery, and having a couple of games under her belt, she was practicing one Tuesday afternoon when the unthinkable occurred again.

“It happened when I went up to hit, again,” said Anspach.  “To this day I swear there was a wet spot right underneath the net and I happened to slip on that.  I landed and hyperextended my left knee.  This one wasn’t as bad.  I mean it hurt but I felt OK, and I thought that there’s no way, no way, that I could have torn the other one the second year in a row.

After meeting with Dr. Benjamin J. Smucker,  he confirmed her fears.  “I guess I was in denial, that there’s no way it could happen again,” she said.  “He  told me that I hyperextended my knee enough that my ACL just snapped.”

An MRI of a torn ACL resembles a plate of spaghetti.  “Seeing pictures before my surgery, it [a torn ACL] looks like an explosion in your knee,” said Anspach.  “It’s just a big mess with string things everywhere.  After [surgery] it looks like a nice canal of flowing strings.”

Coming back from these injuries wasn’t easy.  For the first incident, Anspach had to go to rehabilitation lessons even before her surgery.  Then after both surgeries she had to “go three times a week at OSMC,” said Anspach.  “Rehab after the first surgery focused on stretching and range of motion exercises.  The second one focused more on balance and strengthening exercises.”

After being out for two complete volleyball seasons during her sophomore and junior years, Anspach was able to come back in time for her senior season.  “I can’t even begin to explain how happy I was to be back for my last season,” said Anspach.

Anspach said that  a lot of people that contributed to her return:  volleyball coaches Jim Routhier and Jim Daugherty, long-time roommate Angela Dedering, doctors, trainer Linda Kaminskis and her supportive parents.  “Without the help from all these people, I don’t know if I would’ve been able come back like I did,” she said.

Not only did Anspach need the help from those around her; she also needed to focus on her own state of mind.  “Sometimes it was hard to stay motivated,” said Anspach.  “Surgery was painful…and sometimes I felt down.  But I think  I always had a positive attitude and kept reminding myself that after this I would play again.”

Probability has not been on Anspach’s side since the day she became a Maple Leaf.  So far, three seasons had gone by and she had to sit out for two.  When asked why she chose to play her senior year and instead of giving up, Anspach’s competitive side came out.

“I am a pretty strong-willed person,” said Anspach. “The thought that this could happen again was in the back of my mind, but I think coming from a background of sports really helped me. I have played my whole life.  There was no way that I was going to give up on myself because I got hurt.  I wasn’t going to let that defeat me.”

Anspach kept her word in not letting her previous injuries “defeat” her.  She had the third most kills on her team with 239.  She also finished off the season tied for the third with 51 blocks.

The Maple Leafs’ season came to an end on November 7 went they fell  to Mount Vernon Nazarene University in the Crossroad League quarterfinals.  The Leafs finished 6-12 in conference and 16-18 overall for the season.

Her parting advice for athletes both injured and not is this:  “I never thought I would have the chance to put on my shoe and jersey again,” said Anspach.  “I definitely learned to not take the game for granted.  I now know first-hand how it [the game] could be taken away in a flash.  So enjoy it every second of it.”