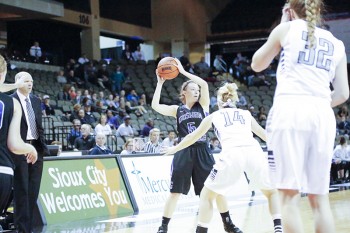 The basketball team won their first tournament game on Wednesday, becoming the first GC team to ever do so.
Photo contributed by Donnie Smith/Southeastern University

The Goshen College women’s basketball team made history on Wednesday afternoon, becoming the first in the college’s history to win a national tournament game when they knocked off the Concordia University Bulldogs with a score of 85-82.

With the victory, Goshen advances to the sweet sixteen of the tournament, where they will take on the St. Xavier University Cougars on Friday at 10:15 CST.

After 10 minutes of play, the Bulldogs ended the first quarter up 21-18, to which the Maple Leafs responded with a 21-19 second quarter. The teams headed to the locker room for halftime with Concordia up 40-39. Eight Maple Leafs scored in the half, with seniors Tyra Carver and Keshia Ward leading the way with 10 points apiece.

The Maple Leafs continued an overall team effort in the third quarter as the game stayed within five points. Each team tallied 25 points in the quarter, and Concordia kept their one-point lead into the fourth quarter, 65-64.

Goshen came out ready in the fourth, and gained their biggest lead with just over five minutes remaining. However, just like the rest of the game had shown, the losing team climbed back to keep the game close.

With 10.3 seconds remaining in regulation, the scoreboard read 82-82 with Concordia taking the ball out in front of their own bench.

An inbound lob pass towards the far side of the rim was too hard, and flew over the head of every player on the court and out of play. This gave possession to the Maple Leafs and a chance to take the lead.

Carver inbounded the ball to Sophia Sears, a junior, as she cut around the left wing. Sears continued towards the rim and drew an extra defender from the backside, leaving Lynnia Noel, a junior, open on the right wing. Sears found her teammate, who nailed a three-pointer with just 6.2 seconds remaining to put Goshen up 85-82.

“The play was actually drawn up for [Sears],” Noel said. “When the double-team came, I knew I needed to get in position in case she could get the ball back to me or one of my teammates. All I could see was the basket and that was all I was worried about.”

With no time outs remaining, Concordia pushed the ball up the court and forced a half-court heave, hitting the rim and bouncing off to the right as the buzzer expired.

The teams fought back and forth the entire contest, with Concordia’s biggest lead being seven midway through the second quarter, and Goshen’s biggest at six midway in the fourth. The game was tied 13 times, and included 22 lead-changes.

The Maple Leafs shot 46 percent from the field and grabbed 38 rebounds. Williams finished with a team-high 19 points and nine rebounds. Carver tallied 17 points, and both coming off the bench, Ward converted for 14 points and Noel finished with 13. Sears lead Goshen with eight assists.

The next game in the tournament will take place on Friday, March 11.