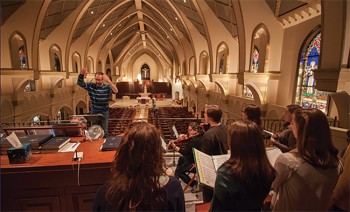 Goshen College Chamber Choir rehearses in Charleston before one of their performances while on tour.
Photo contributed by GC Chamber Choir

During spring break this year, Goshen College’s Chamber Choir went on tour, traveling up and down the east coast and performing each day.

They left Saturday morning, February 20 and arrived in Akron, New York later that night. The following morning, they led the church service at Akron Mennonite and then left for Carthage/Lowville area, also in upstate New York.

From then on, each day contained a concert and sometimes a few workshops with local schools. After Carthage was Ithaca, NY, then Charleston, West Virginia; Washington DC, Lancaster, PA; and finally Kidron, Ohio before finally returning to Indiana. Each place connected in some way to at least one member of the choir.

Scott Hochstetler, the director of Chamber Choir, said, “Our goal was to share our music with churches and schools throughout the east, and in doing so, give our audiences a meaningful worship experience, present a high level of choral performance and foster meaningful connections with GC and those communities.”

As Hochstetler recalls, “The tour was a perfect blend of worship, performance and relaxed fun. This was in large part to some great planning by Dan Koop Liechty and Jan Ramer and all the coordinators from each stop along the way.”

“I love this choir,” he said. “I love the amazing array of sounds that they are able to produce, their ability to listen and match each other’s tone and their carefree and sincere personalities.”

“They are each very special individuals, and they each bring different musical and social gifts to the choir,” Hochstetler said about the members of the Chamber Choir.

The students also seemed to have enjoyed themselves. One of the members, Morgan Short, a junior from Goshen, said, “Tour was a blast. I went into it thinking ‘Oh great. A week on a bus,’ but it ended up being really enjoyable.”

Short wasn’t the only one with that idea. Maddy Garber, a sophomore, said, “It seemed like it would be super exhausting, especially right after midterm week, which it was, but it was also really fun and rewarding.”

The choir did a lot more than sing and spend time sitting on the bus.

Each place they went had something new to offer, including snow tubing and cross-country skiing, walking around the mall in DC, meeting new host families each night and even getting to see the Niagara Falls.

Short said that one of her favorite moments was “walking on the frozen lake at Beaver Camp as the sun was rising.”

Aaron Graber, a junior, said his favorite place was “a tie between the Renwick Museum in Washington DC and our first stop in Akron, New York.”

They also found countless ways to entertain themselves on the long bus rides. “Our time on the bus included a variety of activities, such as doing pull-ups on the overhead carriers, playing games, listening to fantastic jokes provided by Dr. Rocha and even physical fighting in the aisles,” Short said.

However, they didn’t stop singing when they returned to Goshen. Sunday night, February 28, they performed their repertoire once more in Sauder Concert Hall to a large audience of family and friends.

The next concert for Chamber Choir will be the Earthtones concert on April 16.

Hochstetler said, “Our next goal is to have a successful Earthtones concert and give our seniors a nice send-off. That will be very difficult for me, as I will be losing some great people and some great musicians.”