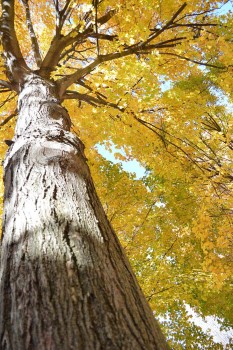 The Arbor Day Foundation has named Goshen College a “Tree Campus USA” for the year of 2015. The college has maintained its status after 2014’s initial induction into the program.

The program Tree Campus USA is a nation-wide opportunity for colleges and universities to engage students and faculty in practicing conservation and forest management.

To be included in the program, the campus must meet the five standards of a “Tree Campus”: maintaining a tree advisory committee, a campus tree-care plan, dedicated annual expenditures for its tree program, Arbor Day observance and a service project that engages the students on campus.

Gabby Castanon, a sophomore, Anja Kenagy, a first-year, Joanna Epp, a senior, and Glenn Gilbert, sustainability coordinator and utilities manager, were the individuals involved in maintaining the College’s status for the second year in a row.

Last November, the committee hosted an event in coordination with Aaron Kingsley, the Goshen City forester. The event was the planting of five Witch Hazel trees along Main Street near the Newcomer building.

Gilbert, who heads the committee, said, “Planting a tree is a tangible expression of faith, hope and love—faith that tomorrow’s campus will be rewarded by today’s efforts, hope that future can and will be a better place and the love of helping to renew and care for God’s creation.”

For years, Goshen College has been home to over 1,100 trees on about 135 acres of land.

“We have made a commitment to replace any tree that dies or needs to be removed for other reasons,” said Gilbert.

The advisory committee plans to continue incorporating more events on campus and even in the surrounding areas in conjunction with the city. Events will hopefully connect those on campus with their environment on campus through personal narratives or other information.

Arbor Day is approaching, and the advisory committee is beginning to make plans for the Arbor Day observance requisite for the year 2016.

The Arbor Day Foundation is a nonprofit organization based out of Nebraska with the mission to inspire people plant and care for trees. The City of Goshen is already a part of one of the many programs in which the Foundation is currently invested, “Tree City USA.”

Goshen first gained its title as a “Tree City” 19 years ago. “Tree Campus USA” began only 5 years ago, and is sponsored by Toyota. The college stands on the list with 10 other Indiana universities, and 253 nationally. Since last year, colleges and universities have invested more than $36.8 million in forest management.