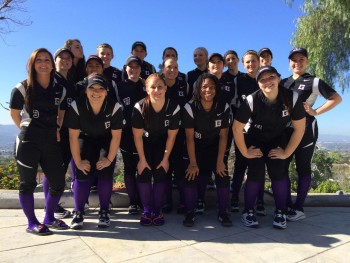 Over spring break, Goshen’s softball team headed for warmer temperatures, traveling to California to begin their season. The Maple Leafs culminated the trip with a 1-9 record over five days of play.

Despite losing their first eight games, Goshen competed well and played several contests where the outcome could have gone either way. Four of the losses were by 3 runs or less and one game against University of Antelope Valley took an extra inning before Goshen fell 3-1.

The Maple Leafs tied the game in the sixth inning when Morgan Owens, a senior, scored on a throwing error. However, the Pioneers were able to score a pair of runs in the 8th to give Antelope Valley the win.

All was not lost, as Goshen ended their trip to California on a high note, winning their final game 4-1 over Marymount California University. Brooke Maes, a sophomore, Krista Sutliff, a junior, and Rae Ann Miller, a first-year, all contributed an RBI (run batted in), with Miller going a perfect 3-of-3 at the plate.

Miller’s contributions weren’t limited to the offense, as she turned in a dominant start on the pitcher’s mound as well. Miller went the complete seven innings while only allowing one run on four hits and striking out six opposing hitters.

The trip saw several players stand out, as Maes collected seven RBIs and a pair of home runs and Miller struck out eighteen batters throughout the course of the week.