How to survive a Trumpocalypse? #Drumpf 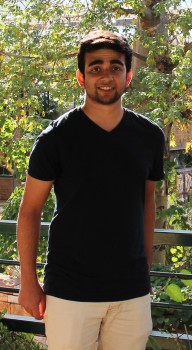 Mikhail Fernandes ponders how to successfully handle a Trumocalypse.

This article is dedicated to John Oliver and aims to further the movement of #MakeDonaldDrumpfAgain. If you happen to live under a rock and haven’t seen the new John Oliver video on Donald Trump, go check it out. The video is available on YouTube.

American politics have taken the world by storm. I initially thought “Game of Thrones” was horrific until I started watching Donald Drumpf (also known as Trump).

Watching the current elections broadcasted on CNN is like watching a cheap reality TV show; we might as well call it “Keeping up with the Republicans.” If a candidate like Drumpf can be considered presidential material, I’m sure Kanye West would do great in the 2020 elections.

Unlike other news channels, I’m here to provide solutions to the current political crisis. I think that there is enough hate in American politics right now and so I want to lighten the mood up. So for those who are concerned about the elections, don’t worry. I have provided three options that you may consider useful in case of a Trumpocalypse:

Bring your Maple Leaf spirit to a country that actually cares about the maple leaf. Canada offers the chance for you to live in a Drumpf-free utopia with breathtaking Canadian nature, heartwarming Canadians and some of the finest maple syrup in the world.

Canada also provides rough winters just like Goshen, so you will feel right at home. Surely there is more to Canada, but that is for you to discover.

Option 2: Vote for anyone but Drumpf.

Drumpf recently said that he loves the uneducated voters and surely there will be more uneducated people in America if he becomes president. In that case, vote for anyone but Drumpf.

If you’re new to the voting process, a good place to start would be to check out the Bernie Sanders campaign. In fact, if you read some of Bernie’s work, you might gain some of your IQ back. #feelthebern

Option 3: Start attending Chapel and Convocation on a weekly basis.

Maybe it would be a good idea to whip out that good old Bible and start praying for our sanity. Get your convocation credit today while making it a meaningful experience. Let’s put our Christ-centered education to the test and pray that Drumpf doesn’t win. May God have mercy on us all.

As part of my concluding remarks, I sincerely hope that America makes a wise choice with who they elect as their next president.

If Bernie Sanders wins the presidential election and abides to his political revolution, I will continue to stay and live up my youthful life in America.

If all fails and all breaks loose with Donald Drumpf winning, I will move to an island or to some remote part of the world till sanity is restored in America.

As an international student, I don’t have a stance in deciding who to vote for in the upcoming election and so I shall remain neutral. May the odds be in your favor, America.