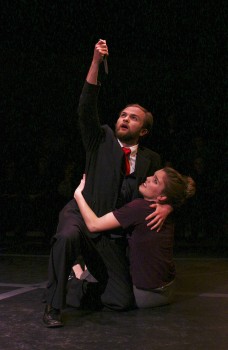 The Goshen College theater department has taken on the classic Shakespeare play “JuliusCaesar” as this year’s spring mainstage. The show will open this weekend, and anyone who has been in Umble Center recently has noticed a striking difference between the setup for this show and prior Goshen mainstage performances: this spring, Julius Caesar will be performed in the round.

According to Jesse Bontreger, a junior and the show’s assistant director, “Audience members can watch from traditional seating or our new seating onstage.”

Lukas Thompson, a first-year who plays Cassius, says that this way, “audience members will be up close to the action.”

For Martin Flowers, a senior, the final mainstage of his GC theater career has been a highlight. “There is no weak link. The actors are awesome, the designers’ creations look absolutely beautiful and it’s all wrapped up by a really inspiring, challenging director.”

That director is Michelle Milne, assistant professor of theater, who has done extensive work with Shakespeare’s plays in the past. Milne chose “Julius Caesar” for this spring’s mainstage intentionally because “the importance of the citizens (the mobs, crowds, and onlookers) to the story makes in-the-round staging a good choice.” She knew she wanted to direct a show in the round to give students a “new acting and design-learning opportunity.”

While to some the works of Shakespeare may have the reputation of being difficult to understand, the cast and crew of “Julius Caesar” are confident that the audience will stay engaged.

Bontreger said, “Some audience members might be initially put off by the idea of lofty language, but I think they’ll be pleasantly surprised by how we’ve modernized the play to resemble contemporary politics.”

According to Flowers, the cast and crew have “almost created this entirely new country called Rome in the modern day, with its own flag and national anthem and way of life.” He added, “It’s especially relevant within the crazy political landscape this year.”

For a twist which harkens back to the times of Shakespeare himself and remains relevant today, a few of the “Julius Caesar” roles were cast across genders.

Christina Hofer, senior, who plays the traditionally-male role of Julius Caesar, says that the casting is meant to challenge the audience to consider the role of gender in politics.

Hofer said, “The gender of the characters does not change the core meaning of the show and that at its core, the characters aren’t defined by their gender.”

Hofer said that the chance to play Caesar has been an empowering one for her. She hopes seeing her perform will help empower other women too.

“This play reflects the reality of our own political scene as the possibility of a female president becomes more and more real,” she said. “In years past, women wouldn’t have the opportunity to be president or play Julius Caesar onstage, and I’m happy to be a part of this progressive movement.”

The cast and crew have been preparing for this show since mid-January.

Thompson said “It’s been a lot of work, but it’s really shaping up—the show has a ton of energy and it’s very powerful.”

Since rehearsals started a week late this year, the cast and crew have been feeling pressed for time. Milne said that the tight schedule “has definitely made some things a little harder, but the constraint of time has also made the process more powerful in other ways. Sometimes constraints can create energy and momentum out of necessity.”

Julius Caesar will open this Friday, March 4, at 8 p.m. on the Goshen College Umble

Center stage. The following performances will take place on March 5 and 11 at 8 p.m. and

March 6, 12 and 13 at 3 p.m. Tickets are $12 for the general public and $7 for students, seniors and GC employees. Convocation credit will also be available for GC students.