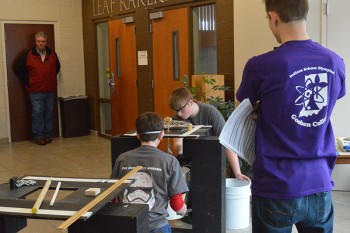 Local middle and high school students traveled to Goshen College on Saturday to take part in the 2016 Science Olympiad.

Beginning in 1983, the Science Olympiad has grown to involve over 12,000 schools nationwide.

The event is fashioned after the Olympic games, offering various competitive events where students exhibit their knowledge of science through projects or timed group challenges.Each team of students participate with the goal of earning enough points to progress onto state-level competition.

A total of 13 high school teams and eight middle school teams participated in the regional tournament, which includes 46 events. Each team of 15 students split apart from their members to participate in separate events, usually in groups of two or three.

The 46 optional events were divided in half according to age category, B-Division being grades six through nine and C-Division grades nine through 12. Participants in the C-Division, marked on the team registration lists submitted on the morning of the competition, are awarded a four-year renewable scholarship to attend Goshen College. The scholarship for participants in one Olympiad tournament will be awarded $500 annually, while students participating in more than one event will receive a $1,000 annual scholarship.

All events were judged by GC faculty and student volunteers. Lydia Good, a sophomore, volunteered for two events, the meteorology test and the “Crave the Wave” event. Both of these were based around a written test that the students used to complete the 50-minute challenge.

“I volunteered because it was extra credit for my math class; I have little involvement in the science department normally,” said Good. “But it was really interesting to be a part of it for one weekend.”

David Housman, event organizer and professor of mathematics and computing, said that students begin preparing for the February Olympiad as early as October. Housman said that, while he tends to be more involved with the math department, he enjoyed judging the event.

“It feels like a sporting event, even though I’ve not really ever viewed science in that way,” said Housman. “At the award ceremony, all the students were cheering each other on and jumping around. They seemed to have a lot of fun.”

Of the 21 teams, four will move on to compete in the statewide tournament.