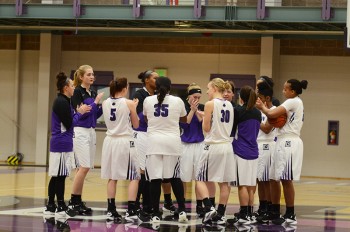 GC women’s basketball are currently ranked #18 in the nation as of Wednesday night.
Photo by Maria Bischoff

For the first time since 2004, the Goshen College women’s basketball team will be hosting a Crossroads League quarterfinal tournament game in Gunden Gymnasium. The game is set for Tuesday, February 23, tipping off at 7 p.m., with the opponent to be determined after the regular season concludes on Saturday.

Boasting a 21-7 overall record (13-3 in the Crossroads League) and ranked 18th in the nation, the women will look to finish out the tail end of their season on a high note and wrap up a second-place finish in the conference. The Maple Leafs will conclude their regular season on the road Saturday against Marian University, who is ranked third in the nation and has already clinched first place in the Crossroads League.

Whether they win or lose the remaining two regular season games, the women have accomplished something that has not been done in over a decade.

“This accomplishment is a tremendous testament to the hard work of the players and coaching staff,” said Josh Gleason, Goshen College’s athletic director. “Individually and as a group they have been dedicated to the process, persevered, and worked their way from the bottom of the league to one of the top seeds in just two years. It is incredible what they have already accomplished and we as a school are so proud of them and excited for what is still in store this year.”

The women have made the community proud, and the support has been evident. “You always want home court advantage during tournament time, and the support we have gotten from the Goshen community has been amazing,” said senior guard Liz Tecca. “Hosting a tournament game has been a huge goal all season, but we won’t settle with just that. We want to win.”

This mentality has proven to be the mindset that helped the women to play in consecutive conference tournaments. Last season Goshen earned the fifth seed and was ousted in the quarterfinals at Huntington University, who went on to lose in the championship.

The program’s continued growth on and off the court has been a point of emphasis for head coach Stephanie Miller and staff the past couple seasons. “The culture of the program has certainly changed in the past couple years,” said Miller. “If I can continue to develop leaders, passionate competitors who never give up, and strong-willed young women who can face challenges without fear, then I’d say the future is bright.”

With the program heading upward, the women have one thing on their mind in the next couple weeks; winning. “We are proud to get the chance to be a part of postseason play as a host, but we are really just trying to win more games,” said Miller. “Getting here is great, but winning here will be excellent and another step in our already historic journey.”