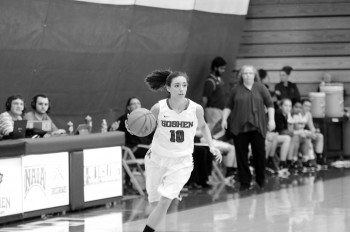 Haley Archibeque, freshman, brings the ball up the court for the Maple Leafs.
Photo by Maria Bischoff

The Maple Leafs will host a postseason contest for the first time since 2004. The women’s basketball team took down Huntington University on Saturday afternoon, narrowly defeating the Foresters 75-72 in women’s basketball action from Gunden Gymnasium. This victory, coupled with a Bethel loss, guarantees a top-four finish in the league and subsequent home contest come tournament time.

With the victory Goshen improves to 19-7 on the season and 11-3 in the Crossroads League, holding second place with a two-game cushion back to third and only four games remaining. Huntington falls to 15-11, 5-9 in league play and in eighth place.

Goshen started hot from the field, and just four and a half minutes into the contest the lead was already up to 17-5 in favor of the home side. Huntington gained some traction and knocked the lead down to single digits, ending the quarter trailing 31-23. Six Maple Leafs scored in the quarter, with Gabby Williams, a junior, leading the way with eight points.

Solid defense from the Maple Leafs helped push the lead back to double digits in the second quarter, as Goshen saw a 14-point lead with three minutes remaining. Huntington cut the lead down to 10 with under a minute to play, but a 3-pointer from Calla Bartlett, a junior, with three seconds left on the clock created a 47-35 lead heading into halftime. Sophia Sears, a junior, led Goshen at the break with nine points and three of her five assists on the game.

The third quarter proved to be much of the same, with Goshen maintaining their double-digit lead. Five Foresters combined for 18 points, while seven Maple Leafs tallied 20 points and Goshen found themselves up 67-53 with just one quarter remaining.

Fourth-quarter heroics brought the Foresters back within four points with just two minutes remaining in the contest. Then Jo’Mani Thomas, a senior, went 1-of-2 from the free throw line to put Goshen up 75-70 with 1:16 on the clock. Huntington responded at the 0:58 mark with a layup, making it a one-possession game, 75-72. The Foresters had two chances to tie the contest in the last minute, but couldn’t capitalize on either opportunity, granting the Maple Leafs their 11th league win of the season and first over the Foresters since 2014.

The Maple Leafs shot 52 percent from the field and had 35 rebounds. Sears and Williams both finished with a team-high 15 points. Williams also added 10 rebounds to earn her 11th double-double of the season. Thomas added 12 points, and Goshen’s bench contributed 17 points across four players.

With the win and a Bethel loss on Saturday, Goshen will host a tournament quarterfinal game on Tuesday, February 23. Goshen’s regular season continued Wednesday night at home against Grace College, with the game finishing after print deadline.

The conference season continues Saturday when the team travels to Mishawaka to take on Bethel College with tip-off at 1:00 p.m.