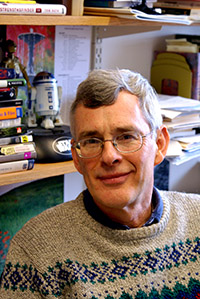 Skip Barnett contributes to student academics and lives through English classes and ISC – as well as most of the Record’s out-of-context quotes.
Photo contributed by Lynelle Leinbach

In a change of pace, Carl Barnett Jr. is on the Features page instead of in the ‘Out-of-Context Professor Quotes.

“I should be more careful about what I say,” he said. “I could say something right now, but you’re going to write it down.”

Barnett is featured with quotes taken out of context nearly every week.

“Sometimes I have too much fun, forget to be a grown up and sort of shoot my mouth off,” Barnett said. “I forget I’m supposed to be the adult in the room and realize I shouldn’t have said that.”

Between the time he’s teaching and his involvement with the International Student Club, there are plenty of opportunities for him to end up on the Funnies page. Barnett spends 75 percent of his time teaching English, with the other 25 percent leading ISC.

He’s a self-described “platypus,” because his position is so hard to classify. He has two different offices and sees both the academic and personal sides of students’ lives, which is something he values.

“What’s nice about that is I get to interact with students in those two different ways,” he said. “Both aspects are really important for helping students develop as young adults.”

Before Barnett came to GC 28 years ago, he was helping immigrants with their English back home in Virginia. But he still wasn’t sure what he wanted to do with his history degree from Duke University.

“I was a confused young person,” he said. “God helped me. It’s funny looking back now; I just got involved with the immigrants through my church because I had some time on my hands.”

When he heard about the opening to teach English, he thought, “I know English!”

Now Barnett’s main task is teaching English as a second language, which got him better connected with the international students, and eventually ISC.

Barnett is big on academics, but also appreciates the interpersonal side of leading ISC.

“I like the fact that I get to relate to people both academically and develop their minds, and I get to ask them how they’re doing and work with their personal lives,” he said. “I get to be the good cop and the bad cop.”

Through his work with ISC, Barnett gets to be involved in students’ lives for all four years.

“It’s gratifying to see them work through all of the stuff and come out on the other end, happy and a little bit smarter,” he said. “You see people who make mistakes, mess up one way or another, and when they can recover from that and figure some things out, it’s really exciting. You feel like you’re doing some good.”

But Barnett hasn’t just been teaching these students; he’s been learning from them.

“I have learned how important it is to get to know people who are different from you,” he said. “That’s the best education you can get. People tend to spend time with people like themselves. I get it, but you don’t learn anything that way.”

Barnett is living that idea out. Faith is an important part of his life, but as an Episcopalian, he is immersed in a Mennonite culture.

“I have benefitted greatly spiritually by being at GC and learning about the Mennonite faith,” he said. “Most denominations have one or two things figured out about God. Mennonites have figured out community, service and singing.”

He feels that the Episcopalian Church is more focused on meditative worship, but he recognizes that there is value in both of these traditions. His time at GC has helped him “get the best out of both traditions in his own life.”

Barnett, more commonly known as Skip, was named after his father and given the nickname Skip in order to distinguish between the two.

“It’s a great honor,” he said. “But for everyone out there who has a child, give them their own name.”

Barnett loves playing music and is “presently in the market for a blues band.”